Enjoying festivals together is best achievement of BD, says PM 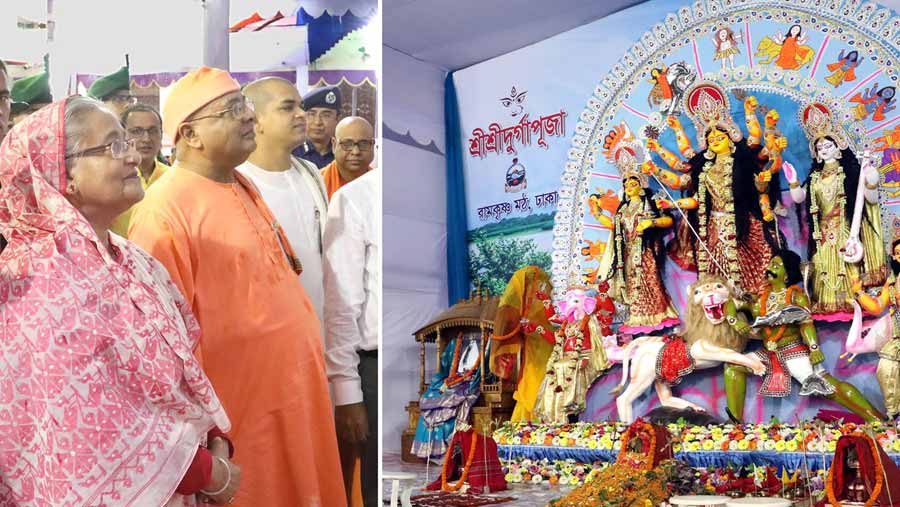 Mentioning that the government has been able to create a conducive atmosphere for all to celebrate religious festivals with due dignity and freedom, Prime Minister Sheikh Hasina said on Monday (Oct 7) it is the best achievement of Bangladesh as all people irrespective of their religions are celebrating the festivals together.

“Bangladesh is a secular state and we all irrespective of religion, caste and creed are moving together along the same road. We all are celebrating festivals including religious ones together which is the best achievement for us,” she said while addressing a function during her visit to the Durga Puja Mandap at Ramkrishna Mission in Dhaka in the afternoon, local media reported.

She extended her greetings to members of the Hindu community at home and abroad on the occasion of their largest religious festival Saradiya Durgoutsab and said, “Religion is an affair of individuals, but festivals are for all.”

Sheikh Hasina said the people of different faiths are living together in this country with the spirit of the Liberation War as they, irrespective of their caste, creed and religion, fought shoulder to shoulder to liberate the country at the call of Father of the Nation Bangabandhu Sheikh Mujibur Rahman.

“So, we wanted to create a congenial atmosphere for the people of all faiths to celebrate their festivals in a nice environment. We have been able to create that environment,” she said.

The conducive environment is created only when Awami League comes to power, she continued.

The slogan ‘Dhormo JaarJaar, Utsob Shobar’ (religion is for individuals, festivals belong to all) is being implemented on the ground, as can be seen from the fact that the Hindu community people are taking the charge of security of Eidgahs during the Eid prayers while Muslim youths are guarding the Puja Mandaps during prayers.

The premier added: “There had been an adverse atmosphere in Bangladesh. But, the Awami League government had been able to create such an environment so everyone can enjoy their religions in the last decade.”

Sheikh Hasina said the puja is being held across the country in a very peaceful atmosphere and the people of other religions are also joining the festival of Durga Puja.

Referring to Pohela Baishakh, she said, “It is a festival now being celebrated together by the people of all faiths while the government is giving festival bonus.”

The premier said that she wanted a country free from militancy, narcotics and corruption which are destroying the families, society and the country as well, adding, “We want continuation of the ongoing peace and progress of the country.”

Sheikh Hasina said she herself and her Indian counterpart Narendra Modi jointly inaugurated the Vivekananda Bhaban hostel in Dhaka on October 5 during her four-day official visit to New Delhi, which facilitates the sanatani Hindu students to study.

In this context, Bangladesh has good relations with neighbouring countries following Bangabandhu’s foreign policy, “Friendship to all, malice to none.”

The premier also thanked members of the law enforcement agencies for their safeguarding the puja mandaps round the clock.

While visiting the Dhakeshwari National Temple in the old city later, Sheikh Hasina said, “People were tortured after the assassination of Father of the Nation Bangabandhu Sheikh Mujibur Rahman. They almost lost the freedom of performing their religious rites.”

After assuming office, she said, the Awami League took the country forward with the ideology of Bangabandhu and ensured freedom for all to practise their religious rituals.

“Now the country is witnessing communal harmony. The financial condition of the people is on the rise. So, the number of puja mandaps has increased across the country. And I want the people, who are now enjoying the festivals together, to continue this spirit in future,” she also said.

She noted that every religion has the same spirit and speaks of brotherhood and tolerance. “If the people have tolerance, sympathy and honour towards each other only then a country can be united, developed and prosperous.”

The premier said the government has been relentlessly working to make the country a prosperous and developed one freeing it from hunger and poverty.