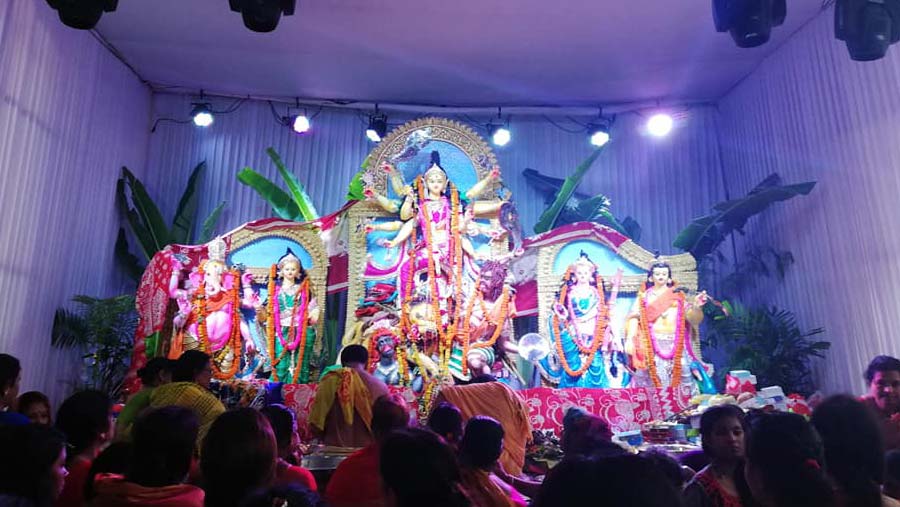 Moha Shaptami, the second day of the five-day Durga Puja of the Bangalee Hindu community, was celebrated with much enthusiasm and religious fervor at temples across the country on Sunday (Oct 6). Moha Shaptami is the seventh day of Devi Pakhsha that began from Mohalaya on Sep 28 heralding the advent of goddess Durga.

Recitation of verses from the holy Chandi, blowing of conch shells and beating of dhak-dhols at temples and pandals are being continued from Moha Shoshti (Friday) which will continue till immersion of idols of goddess Durga on Tuesday (Oct 8).

The five-day festival began on Friday with the incarnation (Bodhon) of the Goddess Durga on the day of Moha Shashti. Moha Ashtami, Kumari Puja and Sandhi Puja were held on Sunday while Moha Nabami Puja on Monday and Bijoya Dashami on Tuesday.

The biggest religious festival of the Hindus will come to an end with the immersion of the idols of the Goddess Durga in the nearby rivers and water bodies across the country on the day of Bijoya Dashami on Oct 8.

A mood of festivity is being witnessed among the devotees irrespective of ages marking the festival while adequate security measures have been taken in the Puja pandals across the country, local media reported.

Draped in new dresses, a large numbers of devotees of all ages thronged the city puja pandals, particularly Dhakeshwari National Temple, and offered prayers before the Goddess Durga seeking peace, prosperity and welfare of the country and its people.

According to the Bangladesh Puja Udjapan Parishad (BPUP), the Durga Puja is being celebrated at 31,398 permanent and temporary Puja Mandaps across the country this year.

Security has been beefed up at all Puja pandals throughout the country, including the capital, with the deployment of additional squads of Ansars, police, RAB and other law enforcers for peaceful celebration of the festival. Besides, voluntary groups will also perform duties at the puja pandals.

Closed circuit television cameras, archways and metal detectors have been installed at all puja mandaps across the country. Law enforcers including intelligence personnel are remain alert to thwart the trouble-makers during the Puja celebrations.

Besides, voluntary groups are also performing duties at the puja pandals.

Bangladesh Puja Udjapan Parishad and Mahanagar Sarbajanin Puja Committee this year decided that the immersion of idols of Durga Puja would be done by 10 p.m. on the day of Bijoya Dashami across the country.