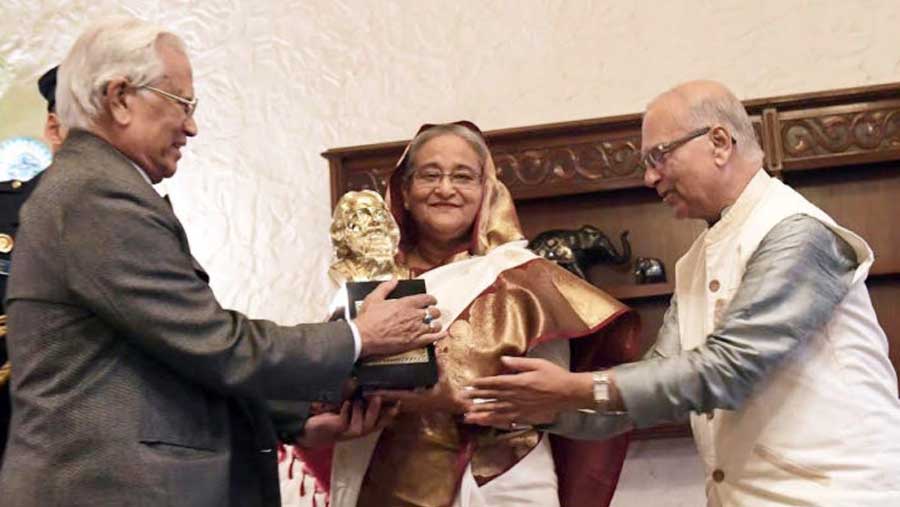 Asiatic Society of Kolkata on Saturday (Oct 5) honoured Prime Minister Sheikh Hasina with the prestigious “Tagore Peace Award-2018” in recognition of her contribution to maintaining regional peace and prosperity. President of Kolkata Asiatic Society Professor Isha Mohammed handed over the award to Sheikh Hasina at a function at Taj Mahal Hotel in the Indian capital.

The Asiatic Society, Kolkata conferred the award on the PM at a function at Taj Mahal Hotel, reports said.

President of the Asiatic Society, Kolkata Prof Isha Mahammad handed over the award to Sheikh Hasina. Its General Secretary Dr Satyabrata Chakrabarti delivered the welcome address at the function.

In the past, noted world leader Nelson Mandela and eminent economist Amarta Sen, among others, received the award.

A citation was read out at the function in honour of the Prime Minister.

"The Asiatic Society is honoured to confer the 'Tagore Peace Award" 2018" to Prime Minister Sheikh Hasina for her contribution towards human understand and peace," the citation said.

After receiving the award, Prime Minister Hasina dedicated it to the people of her country saying, the people of Bangladesh are eligible to get the honour because they voted her to power.

At the invitation of Prime Minister Narendra Modi, Sheikh Hasina is now on an official visit to India.

Apart from her official engagements in New Delhi, Hasina was also invited as the chief guest at the India Economic Summit organised by the World Economic Forum on Oct 3-4.