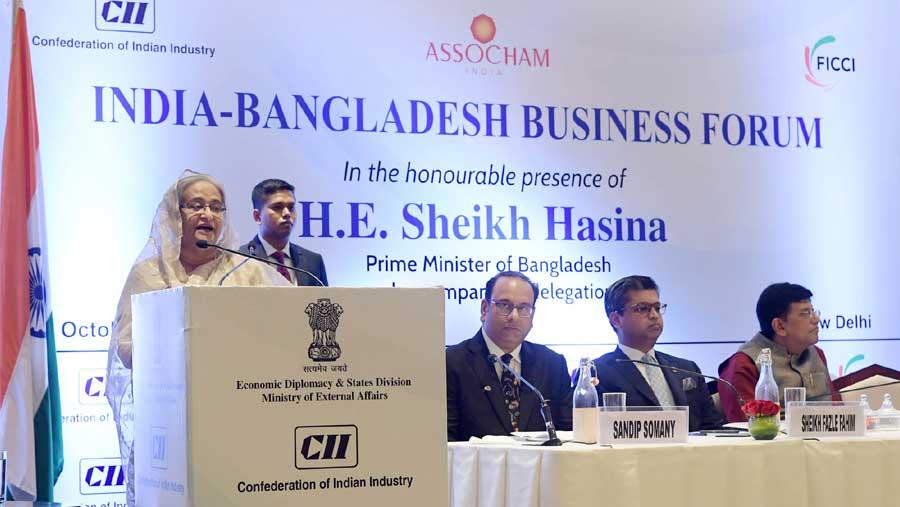 Prime Minister Sheikh Hasina on Friday (Oct 4) urged Indian businessmen to work with their Bangladeshi counterparts for mutual benefit and regional prosperity as she addressed the India-Bangladesh Business Forum (IBBF).

“I would urge all of you to make best use of the platform and contribute to the economies of both the countries for the greater mutual benefits of our peoples,” she told the function at Kamal Mahal Hall of Hotel ICT Maurya in New Delhi, reports said.

The premier said the two countries now enjoy their best ever relations and their joint initiatives could make them alongside the entire region more prosperous.

Sheikh Hasina also told the business communities of the two countries that Bangladeshi and Indian political leadership are committed to ensure the “right kind of enabling environment for you”.

“The platform (IBBF) is there and we are ready to provide every assistance to facilitate your endeavours,” she said.

The premier simultaneously urged the Indian businessmen to step up with investment in special economic zones and high-tech parks in Bangladesh.

She said Bangladesh is in the process of establishing 100 Special Economic Zones. About a dozen of them are ready with four allotments to three countries, she added.

“Strategic location of Bangladesh provides it a tremendous potential for being the economic hub of the region,” Sheikh Hasina said.

She said with India on the west, China on the north and South-East Asia on the east, Bangladesh is in the middle of a combined market of 4 billion people.

Referring to the global FDI (foreign direct investment) growth, the premier said “Persistent growth of global FDI in Bangladesh since our government took over in 2009 reflects the increasing confidence of the foreign investment in Bangladesh.”

Noting foreign investment is protected by relevant acts of Parliament and bilateral investment treaties, she said “We want to see trade and investment together when Indian big investors can set up industries in Bangladesh.”

She said Bangladesh also want to export the products to the north-eastern states of India and to the South-East Asian countries taking advantage of the improved connectivity between the two countries.

The premier further said “We know that most of the growing economies in the world have undertaken their primary trade and investment projects in their neighboring countries.”

She said in the similar manner, Indian business leaders could play a very big role in furthering the two country’s economic prospects.

In this context, she said “Thus, together we would build “Sonar Bangla” or Golden Bangladesh, as dreamt by the Father of our Nation, Bangabandhu Sheikh Mujibur Rahman and that would also be the best tribute we can pay to our martyrs and freedom fighters”.

The premier once again reminded the Indian business leaders of having best liberal investment policy in Bangladesh.

She said “Bangladesh has the most liberal investment policy in South Asia that includes protection of foreign investment by law; generous tax holiday; concessionary duty on import of machinery; unrestricted exit policy; full repatriation of dividend and capital on exit, to name a few.”

Referring to Bangladesh’s potential with a large population, she said young people mostly under the age of 25 are ready to be engaged at very competitive wages.

“Rapid urbanization fed by increasing consumption of electricity and burgeoning growth of middle class indicates the market potential in Bangladesh for investors,” she said.

About Bangladesh government’s “zero tolerance” policy to contain corruption and terrorism, she said Bangladesh is a progressive, secular democracy with a homogenous population of 162 million.

On the rising trend of trade and investment between the two countries, the premier said the volume of bilateral trade has steadily grown during the past years as the balance of trade, however, is still largely in India’s favour.

“The volume of trade between the two countries is nearly 10 billion dollars. In 2018, Bangladesh was India’s eighth largest export destination with 8.8 billion dollars export and our export to India also crossed 1 billion dollar mark for the first time last year,” she said.

So, the premier said, the progress was visible, “but there is lot of scope for further deepening our relations in the area of trade and investment”.

A video presentation titled “Promising Bangladesh” featuring extraordinary growth of Bangladesh in various sectors, particularly in the health, infrastructure development, ICT, leather, and RMG was made.

The Indian minister called upon the businessmen of both the countries to take the ties to a newer height in the economy and businesses sector for betterment of the people of two nations.

He also stressed the need for making balance of trade between the countries.

Tipu Munshi urged the Indian investors to step up with investment in Bangladesh.

Noting that India-Bangladesh relations reached its best ever stage, Prime Minister Sheikh Hasina also said in the function “Even Modiji himself termed that relations as a “Sonali Adhyay”.

“We are confident that in the coming years, we would further lift our relation to new heights,” she added.

The India-Bangladesh cooperation began during the War of Liberation in 1971, she said, adding that the spirit of 1971 has always guided our relations.

She recalled with deep appreciation and gratitude India government and people’s support and cooperation that Bangladesh had received during the Liberation War in 1971.

The premier further said: “Despite profound geo-political changes and challenges, we have been able to strengthen and consolidate our relations, based on the principles of ‘mutual benefit’ and ‘a shared future'”.

She also said “Our cooperation has expanded in all areas, including security, energy, connectivity, trade and investment, defence, culture and people to people contact.”

The prime minister spelled out the success of the country’s economy in the last decade and said “during the last 10 years, our GDP growth averaged 7% reaching 8.1% last year and expecting to be 8.2% in the current fiscal”.

She said the poverty rate has reduced to 41 percent while “our target of reducing poverty is 16-17 percent”.

Referring to a projection by Price Waterhouse Coopers, she said that Bangladesh will be the 29th largest economy in the world by 2030. A recent World Bank publication has included Bangladesh in the five fastest growing economies in the world, she added.

The premier also referred to HSBC’s report of 2018 predicting that Bangladesh will be the 26th largest economy becoming one of the three fastest economies of the World by 2030.

Noting the Asian Development Bank Outlook 2019, she mentioned that Bangladesh is the fastest growing economy in the Asia Pacific region.

The premier said “All these achievements partly fulfill the dream of our Father of the Nation Bangabandhu Sheikh Mujibur Rahman to transform Bangladesh into a “Shonar Bangla”. If all these positive trends continue, we expect eventually to implement our Vision to make Bangladesh a developed country by 2041.”

She also put stress on economic diplomacy along with political diplomacy so that the relations between the two neighbouring countries can be enhanced further.