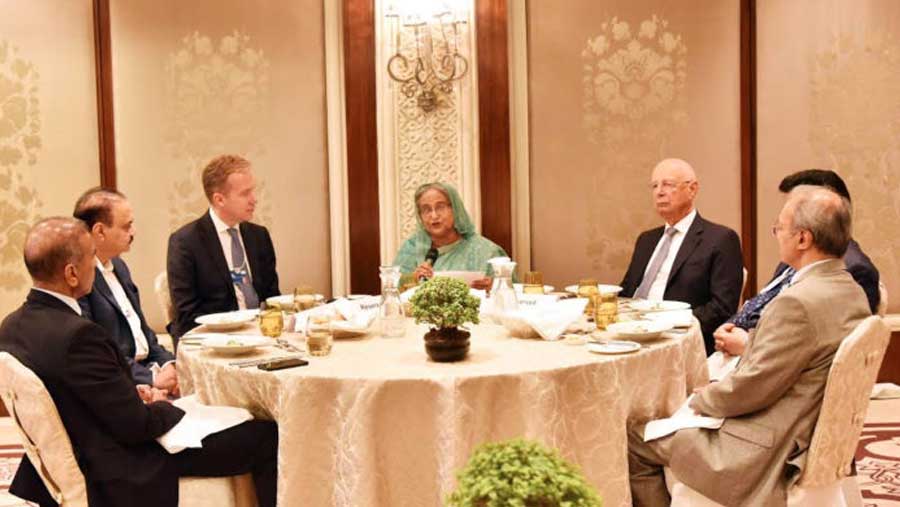 Prime Minister Sheikh Hasina on Thursday (Oct 3) urged the world investors, particularly those from India, to invest in Bangladesh, saying the country’s investment environment is the most liberal one in South Asia.

“It is the time for global investors, particularly Indian entrepreneurs, to invest in Bangladesh in areas like education, light engineering, electronics, automotive industry, artificial Intelligence – beyond the conventional menu,” she said, addressing as the chief guest the country strategy dialogue on Bangladesh in the India Economic Summit of the World Economic Forum at Hotel Taj Palace in New Delhi, reports said.

Spelling out the government measures to attract foreign investment, she said, “We are establishing 100 Special Economic Zones, with one-stop service across Bangladesh. Twelve of the zones are already functioning. Two zones are reserved for Indian investors. A number of high-tech parks are also ready for technology and innovative enterprises.”

The premier gave the credit of massive development to societal values and people’s trust in Bangladesh and said, “Many see Bangladesh as ‘a market’ of over 30 million middle and affluent class population and a ‘development miracle.”

“For me, our strengths are the societal values and peoples’ trust in Bangladesh. Equally, peoples’ aspiration to progress and their resilience as well as their confidence in our leadership,” she continued.

As many as 800 representatives from 40 countries are taking part in the two-day summit ending tomorrow. The Bangladeshi Prime Minister will address the closing session.

“We can serve as the economic hub for the sub-region. Beyond our own 162 million people, Bangladesh can be the connecting landmass to a combined market of nearly 3 billion people,” she added.

Referring to the last year’s HSBC prediction, she said, Bangladesh will be the 26th largest economy in the World by 2030.

“Two things are key: one is our open society, religious harmony, liberal values and secular culture. Other is that two-third of our homogenous population is young – mostly under 25. They are fast skill-able, adaptive to technologies, ready to engage at competitive wages,” she opined.

“We are continuously learning in our journey to development with our confident people, able leadership and governance,” she continued.

Noting that Bangladesh offers a stable and humanitarian state, where leadership is responsive and responsible, the Prime Minister said, “That’s coupled with sound macro-economic fundamentals, pragmatic and open economy shall continue to set global trends and examples of a peaceful and progressive nation.”

The premier said Bangladesh has made the remarkable progress in various sectors following the footsteps of Father of the Nation Bangabandhu Sheikh Mujibur Rahman, as he dreamt of a hunger-, poverty- and exploitation-free ‘Golden Bangladesh’.

“His (Bangabandhu’s) vision gives us the confidence to move with our vision to develop Bangladesh as a developing country by 2021 and a developed one by 2041,” she added.

Highlighting Bangladesh’s achievement in various sectors despite facing various challenges, Sheikh Hasina said, “We have challenges like many other countries but we know how to transform challenges into opportunities.”

“This year, our economy posted a record high growth of 8.1 percent. We are close to achieving double digit growth. Since 2009, Bangladesh economy has grown by 188 percent in size. Our Per Capita Income is around US$ 2000,” she added.

Describing Bangladesh as a fast moving country to a high-value, knowledge-intensive society, beyond apparel manufacturing, Sheikh Hasina said, “Last year, we exported 12 industrial robots to Korea. Four ships made in Bangladesh have come to India.”

The premier said that the Indian Reliance recently purchased large quantity of refrigerators made in Bangladesh.

“Bangladesh also has six lakh (0.6 million) IT freelancers – the largest freelancing community. These speak of a quiet transformation where people have taken risks and faced challenges by adapting to innovation and technology,” she also said.

About agriculture, she said, “Our agriculture is no longer a subsistence one. Beyond self-sufficiency, we are now the 4th largest in rice production, 2nd in jute, 4th in mango, 5th in vegetable production and 4th in inland fisheries, in the world. We are decoding genome of key crops and fruits to move further.”

About transforming the country into a `Digital Bangladesh’ since 2009, the premier said, “We have ensured 100% ICT access for people at the grassroots. Our focus is to employ technology to solve common people’s developmental challenges.”

“As a result, Bangladesh has the 5th largest internet user population in the Asia-Pacific. We are fast moving towards a cashless society. Last year, e-commerce transactions reached 260 million dollars,” she added.

“Bangladesh is urbanizing fast. By 2030, about 48% of our population will live in towns and cities. Most of them will be young, energetic and digitally connected,” she told the summit.

They will be agile, receptive to new ideas and look for new ways of creating wealth, she said, adding in fact, this is already happening with over 110 million active internet subscribers in Bangladesh.

By 2025, mobile internet penetration will reach 41percent population she said and mentioned that over 30 million middle class is “indeed a huge market”.

The WEF leaders, including its president Borge Brende highly praised Prime Minister Sheikh Hasina for her leadership in the massive economic development of Bangladesh such as achieving remarkable growth in GDP and successful implementation of the Millennium Development Goals (MDGs).

They described her as role model of leadership in achieving economic emancipation.