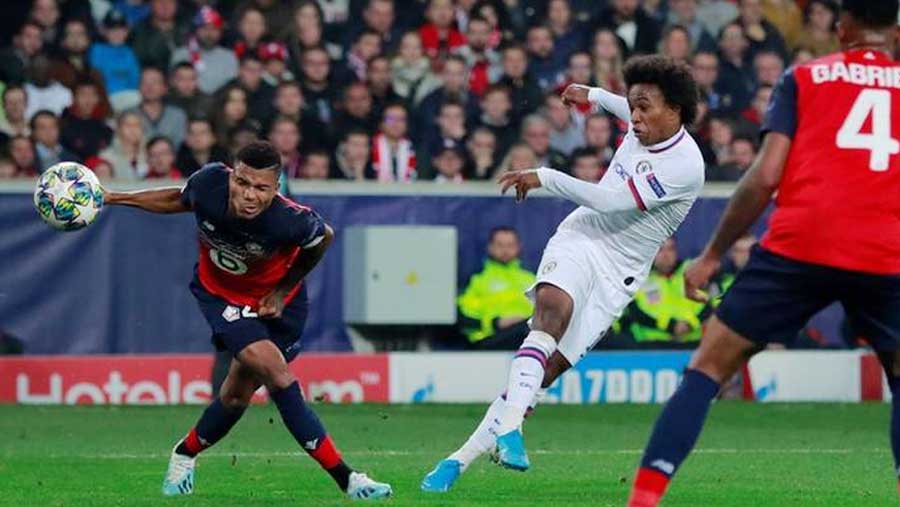 Willian marked his 300th Chelsea appearance by volleying in the deciding goal to secure a 2-1 victory at Lille in the Champions League on Wednesday (Oct 2), handing manager Frank Lampard his first win in Europe.

The Brazilian put away substitute Callum Hudson-Odoi's cross in the 77th minute after Victor Osimhen had cancelled out Tammy Abraham's opener.

However, they have kept just one clean sheet in 11 games under manager Frank Lampard, and none away from home.

The Blues lined up in a 3-4-2-1 formation as Lampard handed starts to 19-year-old Reece James and Fikayo Tomori, 21.

Both impressed but Lille were a threat throughout, and came close on several occasions in the second half.

Goalscorer Osimhen, bought as a summer replacement for Arsenal-bound Nicolas Pepe, caused problems in the air and it was his header which brought Lille level only 11 minutes after Abraham had given Chelsea the lead.

Benjamin Andre's header was tipped past the post by Kepa Arrizabalaga, and the Chelsea keeper had a couple of nervous moments when he was forced to come out to the edge of the box to stop quick counter-attacks.

But Chelsea were the better side and deserved victory - Jorginho smacked the outside of the right post with a curling effort in the first half and Mason Mount was denied from close range after the break.