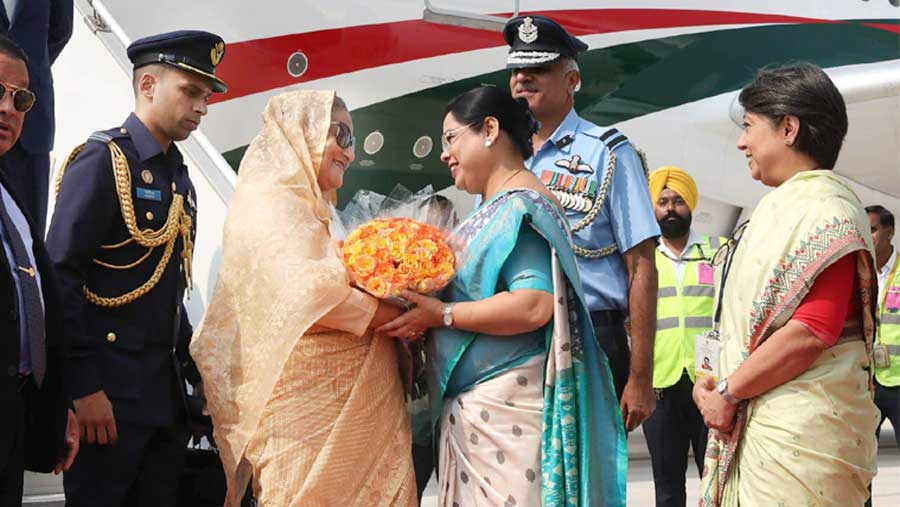 A red carpet was rolled out as Prime Minister Sheikh Hasina arrived in New Delhi this morning on a four-day official visit to attend the India Economic Summit of the World Economic Forum (WEF). A VVIP flight of Biman Bangladesh Airlines carrying the premier and her entourage members landed at Air Force Station, Palam at 9:45 a.m. (local time).

Indian Minister of State for Women and Child Development Debasree Chaudhuri along with Bangladesh High Commissioner to India Syed Moazzem Ali and Indian High Commissioner to Bangladesh Riva Ganguly Das received the PM at the airport with flower bouquet. From there, the Bangladesh Premier was driven to Hotel TajMahal through a ceremonial motorcade where she will be staying during her tour.

On the day, Sheikh Hasina will attend the country strategy dialogue on Bangladesh in the India Economic Summit of the World Economic Forum to be held at Darbar Hall, Hotel Taj Palace.

During her first India visit after assuming office for the third consecutive term, the premier is expected to hold bilateral talks with her Indian counterpart Narendra Modi in New Delhi on Oct 5.

She will pay a courtesy call on Indian President Shri Ram Nath Kovind at Rashtrapati Bhawan on the same day.

Indian National Congress President Sonia Gandhi will call on the Bangladesh premier at her place of residence on Oct 6.

The premier will attend an interactive session with the select CEOs of India at Tian, ITC Maurya and the inauguration ceremony of India-Bangladesh Business Forum (IBBF) at Kamal Mahal, ICT Maurya and closing plenary session of the World Economic Forum at Darbar Hall, Hotel Taj Palace on Oct 4. Deputy Prime Minister of Singapore Heng Swee Keat will pay a courtesy call on PM Sheikh Hasina.

Officials said the premier is scheduled to hold talks with her Indian counterpart Narendra Modi at Hyderabad House picking up the threads of discussion during their recent bilateral meeting on the fringes of the 74th UNGA session in New York.

On the same day, some Exchange of Agreements and Memorandums of Understanding (MoUs) will be signed and the two prime ministers will jointly launch some projects from Hyderabad House.

Earlier in the day, Indian External Affairs Minister Dr S Jaishankar will call on the Bangladesh premier at her place of residence. Sheikh Hasina will also attend an official launch and sign the visitor’s book at Hyderabad House on the same day.

Noted Indian film director Shyam Benegal who is assigned to make a film on the life of Father of the Nation Bangabandhu Sheikh Mujibur Rahman, will meet the Bangladeshi premier during the visit.