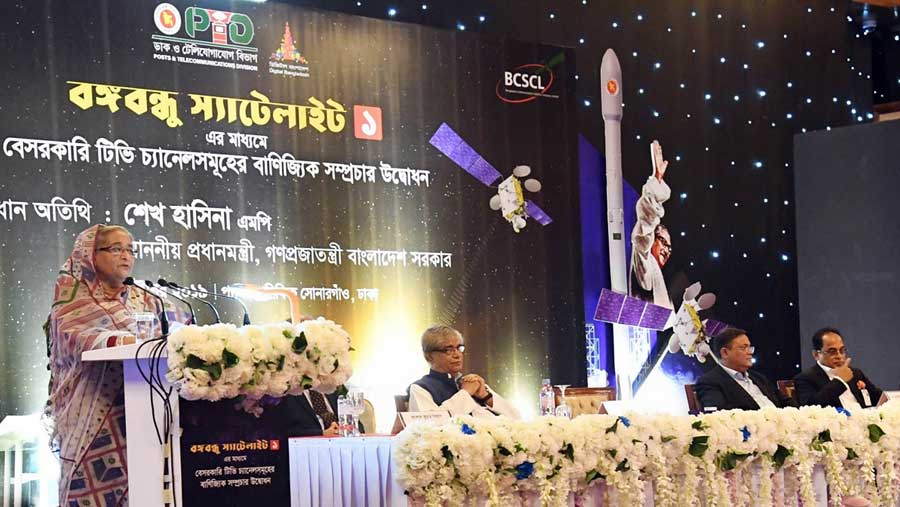 Prime Minister Sheikh Hasina today inaugurated the commercial transmission of all local private television channels using the feed of country’s first communication satellite Bangabandhu Satellite-1 (BS-1) as she addressed a function on the occasion at a city hotel.

With its inauguration, the country’s broadcast industry is going to enter a new era as the BS-1 will save a huge amount of foreign currency to be paid by local TVs as rent.

Information Minister Dr Hasan Mahmud spoke on the occasion as the special guest with Posts and Telecommunications Minister Mustafa Jabbar in the chair.

Secretary of Posts and Telecommunications Division Ashoke Kumar Biswas and Chairman of the Association of Television Channel Owners (ATCO), a platform of private television channel owners, Anjan Chowdhury also spoke on the occasion.

BCSCL Chairman Dr. Shahjahan Mahmood handed over the agreement, inked with the private television channels for their commercial transmission using the feed of Bangabandhu Sattelite-1, to Prime Minister Sheikh Hasina.

Later the premier handed it over to the ATCO chairman.

An audio-video presentation on the multifaceted use of the BS-1 in various sectors for the country’s overall development was made.

Officials concerned said local TV channels have been receiving feed from Apstar 7 and AsiaSat satellites in exchange of US$ 4,000 per Mega Hartz frequency each month on an average, local media reported.

In addition, four channels of the state-owned BTV has been running operation through the feed of BS-1.

All the TVs for their transmission would require the capacities of five transponders of the BS-1.

Besides, the local D2H Akash of BEXIMCO has rented six transponders.

The BCSCL has also connected all TV channels through fiber optic cable with its ground station instead of installing earth station to minimize the cost of TV channel owners.

French manufacturer Thales Alenia Space in November last year handed over the controlling authority of BS-1 to BCSCL, which was launched by the SpaceX on May 12, 2018 from Florida to the orbit.

In addition, BCSCL has hired international consultancy firm Thaicom for two years to run marketing and sale of the connectivity of BS-1 in six countries, including four neighbours. The Thai firm is currently active in around 20 countries.

Thales launched the BS-1 at a cost of Taka 2,765 crore and according to the plan, it will reach the break-even point within seven years of starting its commercial service.

Located at the 119.1 east geostationary slot, BS-1 would cover the SAARC countries and Indonesia, the Philippines, Myanmar, Tajikistan, Kyrgyzstan, Uzbekistan, Turkestan and a part of Kazakhstan.

The coverage is the strongest in Indonesia, the Philippines, India, Sri Lanka, Nepal and Bhutan, for which these six countries have initially been chosen for business.

The satellite’s operations include “direct-to-home” service for TV channels, VSAT (very small aperture terminal), backhaul and network restoration, disaster preparedness and relief and many others.