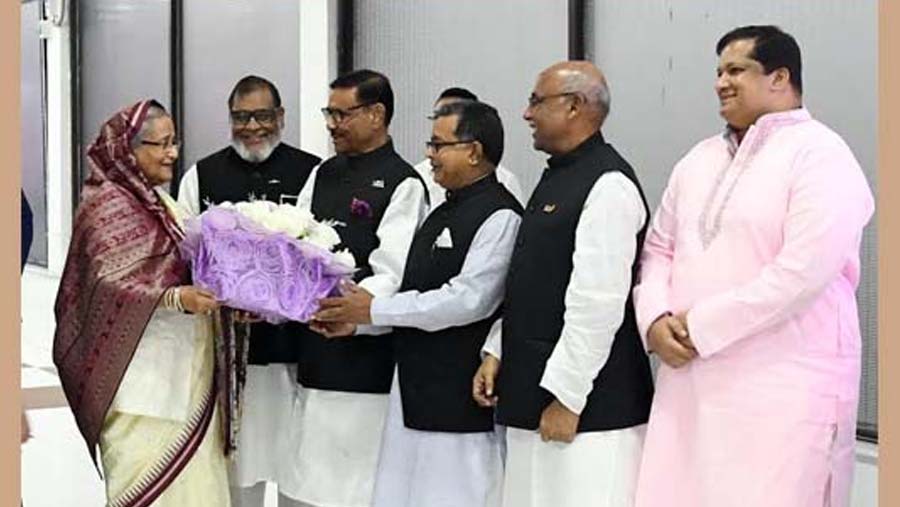 Prime Minister Sheikh Hasina returned home this morning from New York via Abu Dhabi wrapping up her eight-day official visit to the United States where she attended the 74th Session of the United Nations General Assembly (UNGA). A VVIP flight of Biman Bangladesh Airlines carrying the premier and her entourage members landed at Hazrat Shahjalal International Airport, Dhaka around 5.50 a.m.

After a stopover in Abu Dhabi, the capital of the United Arab Emirates, the PM departed from the Abu Dhabi International Airport for Dhaka on Sep 30.

Earlier, a flight of the Etihad Airways carrying the premier and her entourage members landed at the Abu Dhabi International Airport. Bangladesh Ambassador to the UAE Mohammad Imran received the premier at the airport.

The flight earlier took off from John F Kennedy International Airport in New York for Abu Dhabi at 11:35 p.m. local time on Sunday (BST 9:35 a.m. on Monday). Bangladesh Ambassador to USA Mohammad Ziauddin and Ambassador and Permanent Representative of Bangladesh to the UN Masud Bin Momen saw the premier off at the airport.

The PM left Dhaka for New York on Sep 20 to attend the 74th UNGA Session.

Sheikh Hasina delivered the country statement at the 74th UNGA Session in the UN Headquarters in New York on Sep 27 and had a meeting with UN Secretary General Antonio Guterres.

She also joined a civic reception hosted by the U.S. Awami League and a luncheon roundtable meeting arranged by the U.S. Chamber of Commerce.