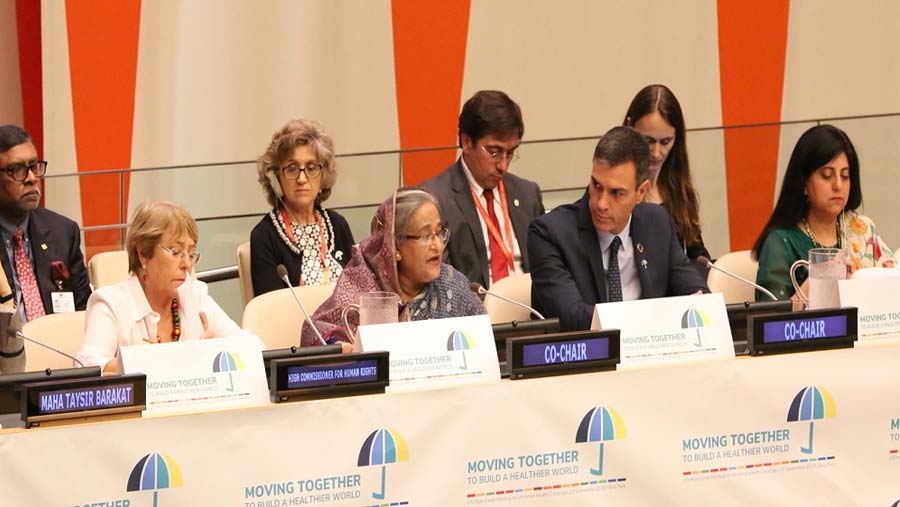 “I believe, collaboration among countries at regional and global levels will be fundamental to accelerate progress for a common goal to achieve Universal Health Coverage,” she said.

Sheikh Hasina also said effective global partnership to formulate healthcare financing strategy for each country could be important to achieve UHC and SDGs by 2030.

The PM was co-chairing an event titled ‘Multi-stakeholder Panel in parallel to the High-level meeting on Universal Health Coverage (UHC)’ at the ECOSOC Chamber in the UN Headquarters in New York.

Spanish Prime Minister Pedro Sanchez also co-chaired the event with the theme ‘UHC as driver of equity, inclusive development and prosperity for all’.

“Resource mobilization to ensure health security under Universal Health Coverage is a fundamental obstacle in many countries,” the PM said.

Sheikh Hasina said as stated in the Universal Declaration of Human Rights, everyone has the rights to a standard of living adequate for the health and well-being.

“In fact, enjoyment of health is one of the fundamental rights of every human being without distinction of race, religion, political belief, and economic or social conditions,” she said.

The PM said inclusive development and prosperity mean two things. “First, irrespective of his/her social background, everyone must get equal opportunity. And secondly, everyone must have equal access to the common benefit and resources,” she said.

“We now see that only generating growth and creating wealth are not enough for progress and well-being unless the access to and distribution of the wealth are just and proper,” she said.

“We have found out that securing universal health coverage is one of the pre-conditions for establishing a righteous and fair society as our health equates to our existence,” the prime minister continued.

About 100 million people, she mentioned, are pushed into extreme poverty each year because of health expenses, and 800 million people spend at least 10 per cent or more of their household budget on healthcare expenses.

The PM said the poor people often cannot get services from privately-owned healthcare providers resulting in grave insecurity in maintaining their lives and livelihoods.

Sheikh Hasina said the equity in healthcare services could be ensured through Universal Health Coverage-UHC by reaching the poorest segment of the society with affordable and efficient health services.

The PM said while adopting Agenda 2030 in 2015, the world committed that all individuals and communities should be able to receive essential health services and no one should be left behind.

She said the equity in healthcare services could be ensured through Universal Health Coverage-UHC by reaching to the poorest segment of the society with affordable and efficient health services.

“No one must be forced into poverty because of healthcare expenses. We will try to find the means and ways to avoid being poorer in health crisis situations,” she said.

The premier went on saying: “In fact, 90% of health needs can be met at the primary healthcare level.”

Sheikh Hasina said strong primary healthcare systems can be the first line of defense against communicable and non-communicable diseases and should be a priority for all countries working to deliver SDG 3.

The PM said her government has established about 14,000 ‘Community Clinics’ and Union Health Centers across the country to provide primary healthcare to rural people.

“On an average 40 patients take health services from each community clinic per day and 90% of them are women and children,” she said, adding more than 10 million visits are made to these community clinics every month.