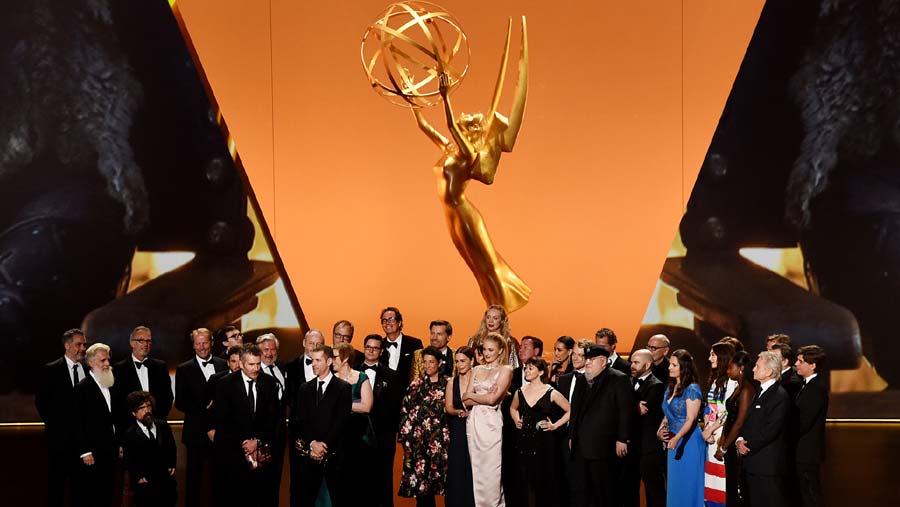 "Game of Thrones" capped its epic run with its fourth Emmy as best drama series, entering exclusive company among all-time dramas and equaling its single-year record of a dozen trophies for the 71st Emmy Awards, the TV industry's most prestigious honors.

Amazon's "Fleabag" was a major upset winner for best comedy, picking up four awards in all, including acting and writing honors for its star, Phoebe Waller-Bridge.

The two additional awards on Sunday (Sep 22) bring its all-time total to 59, a record for any program, after a record number of nominations in its swan-song year.

The Emmys smiled on familiar faces and but stood out with a surprising number of newcomers, on a historic night that saw a breakthrough win for "Pose" star Billy Porter -- and several speeches citing LGBTQ and women's rights.

Amazon delivered in the comedy categories, with five early prizes for the second-year series "Fleabag" and "The Marvelous Mrs. Maisel."

In terms of the familiar, "Last Week Tonight With John Oliver" became a four-peat winner in the variety talk balloting, in much the way "The Daily Show" owned that category for a decade. Peter Dinklage also walked away with his fourth supporting actor Emmy for "Thrones."

Still, all that glittered was not old, in a night that spread the wealth among networks and series, reflecting the breadth and depth of the current TV landscape.

"Chernobyl" was named best limited series, with additional honors for writing and directing in a loaded category that included "When They See Us" and "Fosse/Verdon," whose star, Michelle Williams, took lead actress.

Accepting for "Chernobyl," writer-producer Craig Mazin said he hoped the story about the nuclear-plant disaster in 1986 would remind people "of the value of the truth, and the danger of a lie." It was one of several not-so-subtle political messages woven into the telecast, although President Donald Trump was never overtly mentioned.

A relative newcomer, Jerome triumphed against a field of veteran actors and Oscar winners for "When They See Us," writer-director Ava DuVernay's Netflix limited series about the Central Park Five, to whom he dedicated the prize, along with his parents.

Williams, meanwhile, was one of several honorees to speak of female empowerment and hearing women, after winning for her portrayal of actress/dancer Gwen Verdon, in another example of Hollywood having a fondness for Hollywood stories.

In her accepting speech, Patricia Arquette -- a supporting actress winner for Hulu's "The Act" -- teared up speaking about the death of her sister, actress and transgender activist Alexis Arquette, while making a plea for rights and acceptance of transgender people.

Waller-Bridge's acting victory deprived Julia Louis-Dreyfus a chance to make Emmy history. A win would have made the "Veep" star the most-honored performer for acting, leaving her tied with Cloris Leachman, with eight in her career. (Louis-Dreyfus has three more awards for producing the show.)

"Fleabag" also won the Emmy for directing, while Emmy voters again smiled on the period dramedy "Mrs. Maisel," which mounted a near-sweep of those awards last year (with "Veep," notably, sitting out the race). Alex Borstein claimed her second consecutive supporting actress win for the Amazon dramedy, while Tony Shalhoub received his fourth Emmy overall.

Bill Hader was a repeat winner as lead actor for HBO's "Barry," breaking up what was otherwise an Amazon block party.

Repeat winners, in fact, dominated the early part of the show, with "RuPaul's Drag Race" running off with the prize for best competition program. Host RuPaul injected the first note of politics into the evening, urging viewers to go register and vote.

Once the comedy categories ended, the show quickly conjured several emotional moments, including standing ovations for the casts of "Game of Thrones" and "Veep," the two long-running HBO series that ended their runs in the spring.

HBO finished the two-part Emmy process with 34 Emmys -- including nine on Sunday night, or a third of those doled out -- followed by Netflix, with 27, Amazon -- the runner-up in terms of high-profile victories Sunday, with seven -- finished with 15, in a night that saw ads for new streaming players, Disney+ and Apple TV+, which will launch in November.

In a sign of the times, NBC garnered a pair of awards for "Saturday Night Live," the only broadcast program to earn an award on Sunday. All told, the four major broadcasters totaled 16 awards this year, mostly in technical areas, as eight networks or streaming services took at least one honor during Sunday's festivities.

"Chernobyl" amassed 10 wins, while "Mrs. Maisel" and "Fleabag" finished the season with eight and six, respectively.

HBO and Netflix entered Emmy night with 25 and 23 awards, respectively, from the Creative Arts Emmys, which were presented last weekend.

Like this year's Oscars, the Emmys were presented without a host, but as usual was presented as a broad celebration of the medium.

Fox televised the ceremony, and used the pre-show as a springboard to help promote the return of its musical reality show "The Masked Singer."