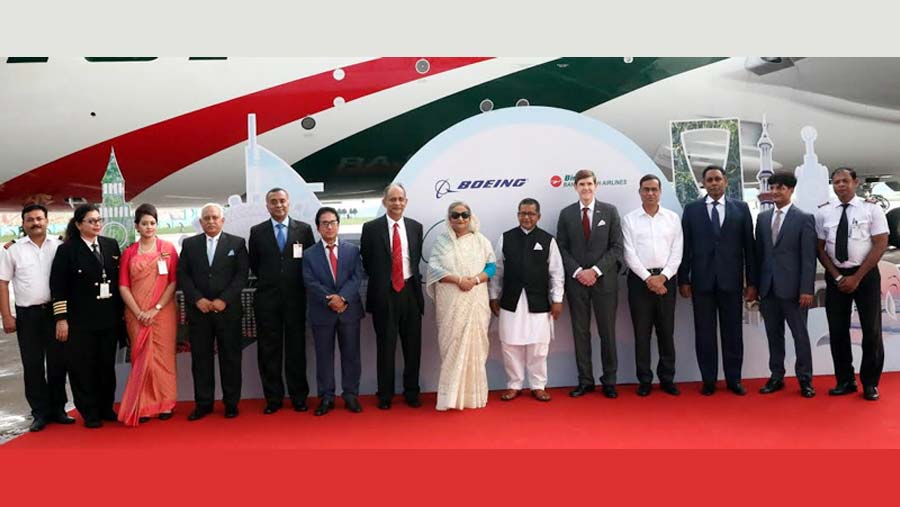 Hinting at purchasing two more Boeing aircraft for Bangladesh Biman, Prime Minister Sheikh Hasina on Tuesday (Sep 17) asked the authorities of the national flag carrier to work with honesty and sincerity to ensure the quality of passenger services.

“Apart from the existing aircraft, three Dash Bombardier planes will be added to the Biman fleet. We have also got news that Boeing is interested to sell its two aircraft soon, the order of which was canceled by somebody else… we’ll take this opportunity,” she said.

The PM was addressing as the chief guest the induction ceremony of Biman’s 4th Dreamliner, ‘Rajhangsha’, at the VVIP Terminal of Hazrat Shahjalal International Airport (HSIA) in Dhaka in the afternoon.

In this connection, Sheikh Hasina said the country’s foreign currency reserve remains at a good position and there will be no problem to purchase two new Boeing aircraft.

US Ambassador to Bangladesh Earl R. Miller was also present at the ceremony, local media reported.

Earlier, the premier formally commissioned the newly-procured state-of-the-art aircraft of the national flag carrier by cutting a ribbon at the VVIP Tarmac of HSIA.

After the inauguration, Sheikh Hasina boarded the aircraft, inspected it and talked to the pilots and the crew members.

A munajat was offered on the occasion, seeking continued peace, progress and prosperity of the nation.

About the country’s current forex reserve, the prime minister said: “We calculate it because there should have such an amount deposited with which we can purchase the food for three months if the country is hit by any natural disaster.”

She went on saying: “There is no need to keep additional amount of reserve money. We can utilise the additional money in development purpose.”

The premier said the government will purchase two cargo planes to create more opportunities for exporting goods, including foods. “We’ll also set up a cargo village so that we could export easily,” she said.

The fourth Boeing 787-8 Dreamliner, the 16th aircraft of the national flag carrier, was added to the Biman’s fleet on Sep 14. It landed at HSIA directly from the USA’s Seattle’s Boeing Factory in the afternoon on the day.

Biman’s acting Managing Director and CEO Captain Farhat Hasan Jamil along with other high officials received the Dreamliner at the airport after welcoming it with a water cannon salute.

Earlier, the first and second Boeing 787-8 Dreamliners, named as ‘Akash Beena’ and ‘Hangsabalaka’ respectively, arrived here in August and December last year, while the third one known as ‘Gaangchil’ landed in July last.

The PM named all the Dreamliners, the source said.

Rajhangsha, the 271-seat Boeing 787-8, has been designed as 20 percent fuel efficient carrier compared to the other aircraft. The airliner has the capacity to fly 16 hours nonstop with an average speed of 650 miles per hour.

It will provide its passengers with WiFi services at a height of 43,000 feet, allowing passengers to browse the internet or connect with their friends and family from any place of the world.