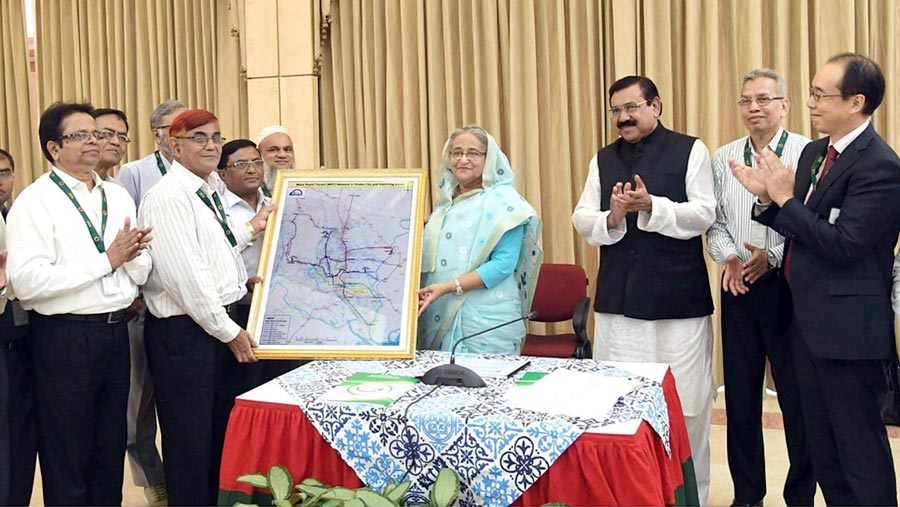 Putting emphasis on ensuring the security of Dhaka metro rail project, Prime Minister Sheikh Hasina on Monday (Sep 16) said a special police unit will be formed to this end. The PM was speaking at a review meeting on the progress of the ongoing Mass Rapid Transit Project held at her official residence Ganobhaban, local media reported.

At the meeting, the PM witnessed a power-point presentation on the progress of MRT Line 6, MRT Line 1, 2, 3, 4 and 5 being implemented by the government owned Dhaka Mass Rapid Transit Company Ltd in collaboration with JICA.

Managing Director of the DMTCL M A N Siddique made the power-point presentation on progress of the implementation of the 'Time Bound Action Plan 2030 for Construction of the MRT Lines in Dhaka City and its adjoining areas'.

The PM also gave some specific directives and guidelines to the authorities concerned to accommodate those in the implementation process.

Besides, she directed Chief Executive of the National Security Council Asaduzzaman Mia to look into the problems of extension of the MRT Line 6 from Motijheel to Kamalapur.

The meeting was informed that about 46 percent of the Uttara-Agargaon part and 24 percent of the Agargaon-Motijheel part of the MRT Line-6 have been completed so far.

The DMTCL Managing Director said the overall progress of works of the MRT Line-6 is 30 percent, while works on construction of viaduct with Parapet Wall on Uttara-Motijheel part is nearing completion.

M A N Siddique assured the PM of completing the works of MRT Line-6 starting from Uttara to Motijheel via Agargaon by December 2021.

During the meeting, the DMTCL authorities also apprised the Prime Minister of the time-bound plans of completing the MRT Lines works by the year 2030 to ensure modern elevated and underground rail networks across Dhaka city.

They hoped people in the capital city will have most modern and sophisticated metro rail system like other modern and big cities around the world.