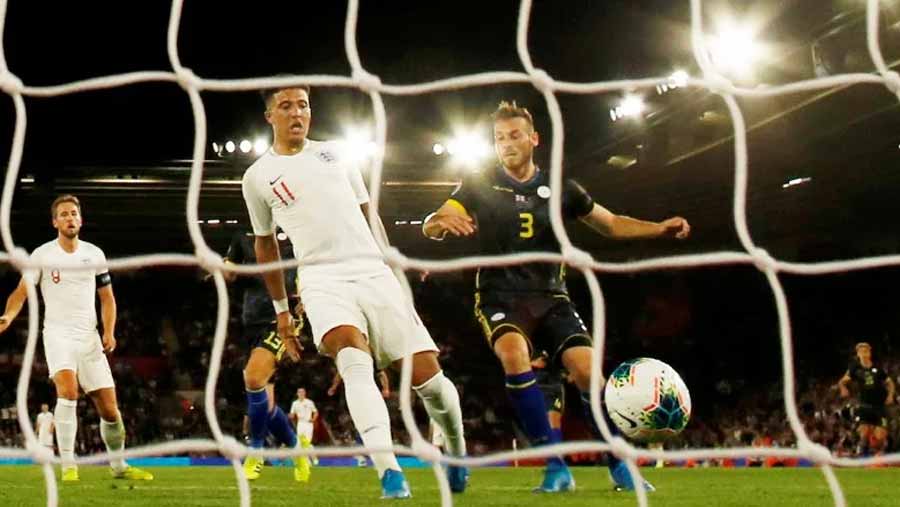 England's relentless march towards Euro 2020 continued with a thrilling victory over Kosovo, who scored after just 35 seconds.

England recovered from conceding a goal after 35 seconds to score five times in the first half in a 5-3 win over Kosovo on Tuesday (Sep 10), maintaining the team's perfect start to qualifying for next year's European Championship.

Jadon Sancho scored twice in two minutes - the 19-year-old winger's first goals at senior international level - to cap an England comeback that also featured goals for Raheem Sterling and Harry Kane. There was also an own-goal.

Kosovo's commitment to attack left the team wide open at the back but threatening going forward, making for an end-to-end match at St. Mary's Stadium in Southampton on a rare occasion England wasn't playing a home international at Wembley Stadium.

Valon Berisha took advantage of a careless pass from England defender Michael Keane to put Kosovo ahead inside the first minute, and also scored at the start of the second half with a curling effort into the top corner in the 49th.

When Vedat Muriqi converted a 55th-minute penalty, after the forward himself was tripped by England defender Harry Maguire, there was an outside chance that Kosovo -- only accepted as a member of UEFA and FIFA in 2016 -- was going to keep alive its unbeaten 15-match run stretching back two years.

Yet, England didn't concede again, and could even afford to fail from the penalty spot when Kane's attempt was saved by goalkeeper Arijanet Muric. Sterling also struck a shot against the post in the second half.

England has won all four of its games in Group A, scoring 19 goals, and still hasn't lost a qualifier for either the World Cup or European Championship in 10 years.