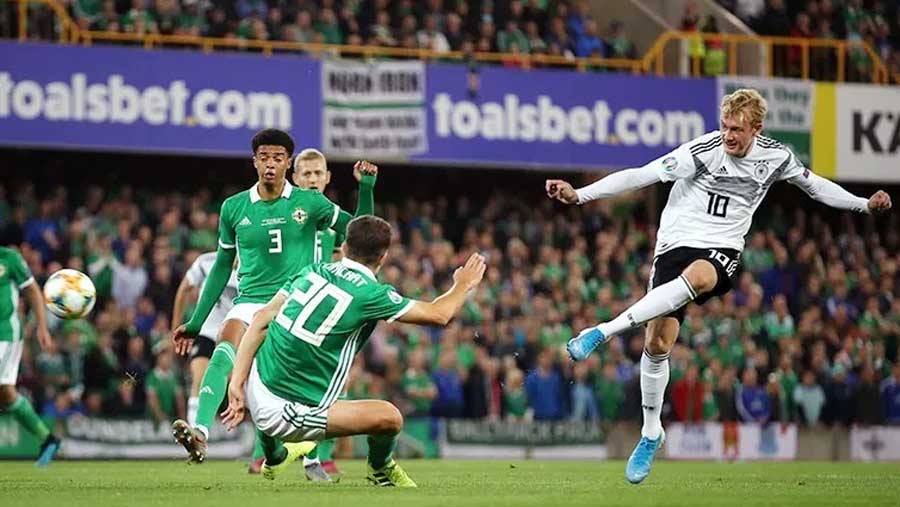 Germany beat hosts Northern Ireland 2-0 on Monday (Sep 9) to get their Euro 2020 qualification on track as they bounced back from last week's loss to the Netherlands in Group C.

Northern Ireland's Euro 2020 qualifying hopes suffered a major setback as they lost 2-0 to Germany in a pulsating qualifier at Windsor Park.

NI keeper Bailey Peacock-Farrell made some fine saves as Germany dominated the second half.

Northern Ireland produced a spirited display but now face an uphill struggle to qualify for a second successive Euro finals after suffering an eighth consecutive defeat in matches against the Germans.

Michael O'Neill's side hoped to build on the momentum generated by winning their first four matches of a qualifying campaign for the first time - home and away doubles over Estonia and Belarus - but eventually came out second best to the three-time European champions.

The Netherlands' win over Estonia moves them to within three points of the two teams at the top of Group C and the Dutch will be NI's next opponents in Rotterdam on Oct 10.

Further matches at home to Ronald Koeman's side and away to the Germans complete the campaign in November with the top two teams to qualify.