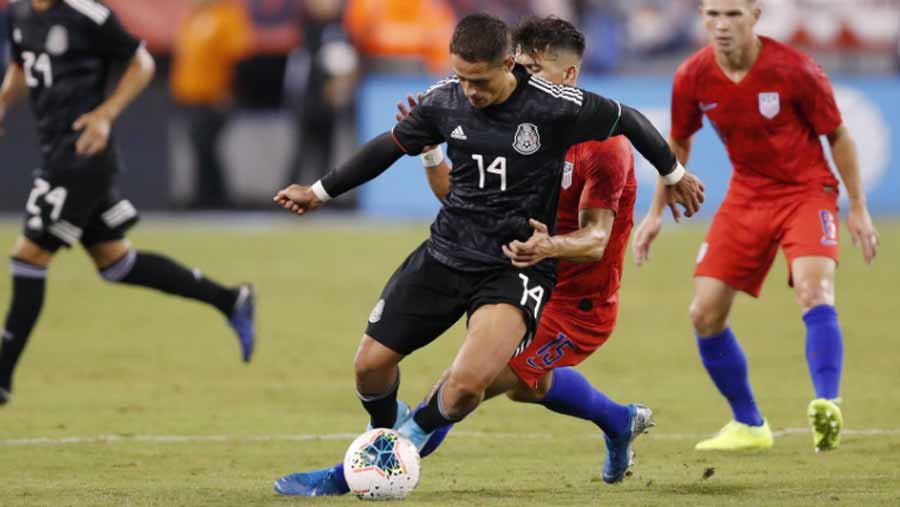 Javier Hernandez scored in the first half, Erick Gutierrez and Uriel Antuna had late goals four minutes apart and Mexico defeated the U.S. men's national team 3-0 in a friendly at MetLife Stadium in East Rutherford, N.J., on Friday (Sep 6).

Mexico, who are ranked 12th in the world, have now won five of the last six contests between the countries including a 1-0 victory in their last game, the Gold Cup final on Jul 7.

Mexico’s 31-player roster included all 23 players that were part of the 2019 Gold Cup winning squad, while the US had 15 players from their runner-up squad.

Mexico did a good job of pressuring the US defence in their own end, forcing turnovers and creating scoring chances.

There were so many green and red-clad fans among the throng of 47,900 at MetLife Stadium that it sounded like the game was being played in Azteca Stadium instead of the state of New Jersey.

Forward Javier Hernandez opened the scoring by heading home a Jesus ‘Tecatito’ Corona pass in the 21st minute. Corona undressed US defender Sergino Dest with a slick between-the-legs move and then crossed it to the middle of the box where Hernandez headed it home.

The U.S. had a couple of scoring chances in the first half, sparked by a number of strong rushes from Chelsea’s Christian Pulisic, who was their best player early on.

Tempers flared in the 56th minute when Alfredo Morales of the U.S. and Mexico’s Hector Herrera tangled at midfield.

Herrera came halfway across the field during a pause in play to slap Morales in the throat. Morales pushed his hand away as players from both teams joined the fracas. No punches were thrown and no one was injured.

Gutierrez made it 2-0 in the 78th minute with a left footed shot from outside the box to the bottom right corner. Gutierrez scored after US goalkeeper Zac Steffen misplayed a short pass to one of this defenders in front of his goal.

Just four minutes later, Antuna finished off a nice passing sequence with Napoli’s Hirving ‘Chucky’ Lozano with a blast from the centre of the box to the bottom right corner.

Josh Sargent had the best chance of the game to score for the Americans in the 87th minute. But he was stopped on a penalty kick by goalkeeper Jonathan Orazco, who guessed right on Sargent’s blast to the bottom left corner. Morales also hit the post in the 80th minute.