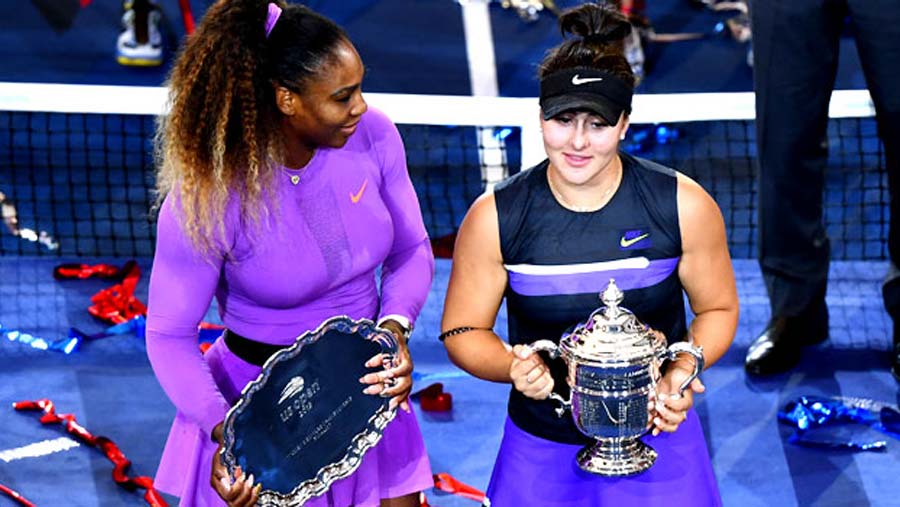 Teenager Bianca Andreescu stunned Serena Williams in a gripping US Open final to claim a first Grand Slam title and deny the American a 24th major.

Canadian 15th seed Andreescu, in the main draw here for the first time, blew a double break in the second set before taking her third match point and falling to the ground in disbelief.

"This year has been a dream come true," Andreescu told the crowd.

"I am beyond grateful and truly blessed. I've worked really hard for this moment. To play on this stage against Serena - a true legend of the sport - is amazing."

To the disappointment of a stunned home crowd on a passionate Arthur Ashe Stadium, Serena has now lost four successive major finals.

Serena, seeded eighth, looked edgy throughout as she aimed to match Australian Margaret Court's tally of all-time major wins, handing over the first three of Andreescu's five breaks of serve with double faults.

By contrast, Andreescu played with the confidence which has marked her out as a star in a stunning breakthrough year.

She is the first Canadian to win a tennis major and the first teenager to win a Grand Slam since Maria Sharapova claimed the 2006 title at Flushing Meadows.

She is the first teenager to win their maiden Slam since Russian Sharapova at Wimbledon in 2004.

Andreescu kept her nerve to take a third match point with a forehand down the line, dropping her racquet to the ground and then, after a warm hug with Serena, lying on the court with her arms spread out as she contemplated her achievement.

After returning to her feet, she used a hastily-arranged step ladder to climb into her player's box and embrace her nearest and dearest, including parents Nicu and Maria.