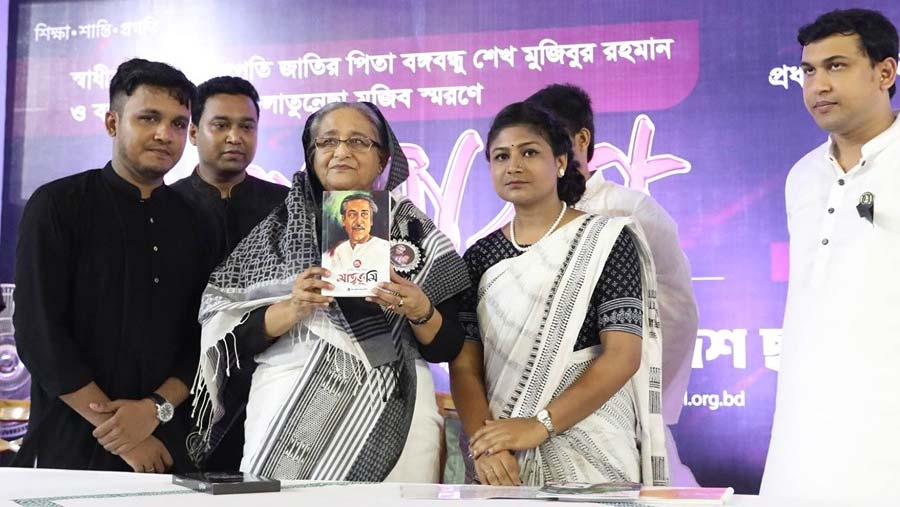 Prime Minister Sheikh Hasina on Saturday (Aug 31) asked leaders and activists of the Bangladesh Chhatra League to work for welfare of the people being imbued with the ideology of Bangabandhu Sheikh Mujibur Rahman.

“If you want to build yourselves as soldier of Father of the Nation Bangabandhu Sheikh Mujibur Rahman, you would have to work for the welfare of the people of the country by keeping away from all the personal gains following the ideology of Bangabandhu,” she told the Chhatra League leaders and activists.

The PM was addressing as the chief guest a discussion marking the 44th martyrdom anniversary of Father of the Nation Bangabandhu Sheikh Mujibur Rahman and National Mourning Day organised by the Bangladesh Chhatra League at her official residence Ganabhaban, local media reported.

“Bangabandhu scarified his life for the betterment of the people. You would have to work for the people for whom Bangabandhu dedicated his entire life,” she said to the Chhatra League workers.

A minute’s silence was observed at the function as a mark of respect to the memory of Father of the Nation Bangabandhu Sheikh Mujibur Rahman and other martyrs of the Aug 15, 1975 carnage.

The PM also unveiled the cover of the Bangladesh Chhatra League’s regular publication “Matribhumi” and its monthly mouthpiece “Joy Bangla”, which is going to be published regularly from this August.

A three-minute video documentary on the activities of Chhatra League and its role in building the nation and a promo of mobile game on the Liberation War made by Chhatra League leaders, were also screened on the occasion.

Sheikh Hasina, also President of Bangladesh Awami League, asked the Chhatra League leaders and activists to groom themselves imbuing with the ideology of sacrificing mindset leaving aside all desires to make personal gains.

Recalling the contribution of Bangabandhu to achieving independence, she said, “Bangabandhu had initiated the Language Movement to establish Bangla as the state language and thus prepared the entire nation to forge a movement to make Bangladesh an independent country.”

In this context, the premier said, “The only reason of assassinating the Father of the Nation along with most of his family members was that he (Bangabandhu) had liberated the country.”

The defeated forces of the Liberation War wanted to make Bangladesh a failed state through the assassination of Bangabandhu, she said.

The PM called upon all to be cautious against the defeated forces as they are still hatching conspiracies to halt the country’s development and they never wanted Bangladesh’s progress.

In this context, Sheikh Hasina recalled the contributions of Bangamata in running the Chhatra League while the Father of the Nation was in jail. She continued, “My mother had given the necessary instructions to the Chhatra League on how to lead every movement.”

While recalling the past incidents of pathos, including the 15th August massacre, she turned emotional and said that military dictator and the then President Ziaur Rahman did not allow her (Sheikh Hasina) to enter into the 32 no Dhanmondi residence after her return to the country in 1981.

Sheikh Hasina said the development of the country happens only whenever the Awami League, which liberated the country, comes to power. But no development took place when the defeated forces of the Liberation War and their collaborators were in power, she noted.

Regarding BAKSAL, she said many people are out to mislead the people falsifying the objectives of BAKSAL. The BAKSAL was formed to bring all sections of people under a platform to ensure economic emancipation, she added.

Describing Bangladesh as a role model of development for the entire world, she said “Bangladesh is currently occupying the first position in terms of achieving GDP growth and this achievement has become possible after going through a long process of development.”

In this regard, the Prime Minister said, “My only aim is to build Bangladesh a developed and prosperous country by changing the lot of the people as dreamt by Bangabandhu,” she said.

Sheikh Hasina said, “My father used to say that he loved the countrymen most.”

“So I am working for the betterment of the people following the footsteps of the Father of the Nation” she added.