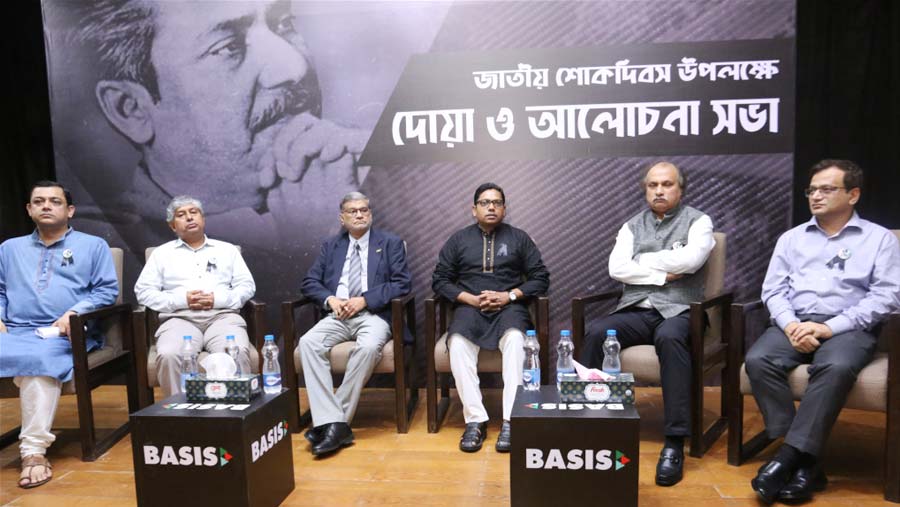 The 44th death anniversary of Father of the Nation Bangabandhu Sheikh Mujibur Rahman and National Mourning Day 2019 was observed by Bangladesh Association of Software & Information Services (BASIS) on Wednesday (Aug 27) through a discussion and Doa Mehfil. The program took place at the Krishibid Institute of Bangladesh Complex 3D seminar hall.

At the inaugural speech BASIS President said, Bangabandhu said, ‘‘I love my country people, that my biggest inner strength, and that’s also my weakest point.’’

Bangabandhu has worked for this country throughout his life. Now his beloved daughter, Prime Minister Sheikh Hasina is building Digital Bangladesh. ICT Division is working relentlessly in this process. BASIS is working along. Today we are humbly remembering the Architect of Independence, Father of the Nation Bangabandhu Sheikh Mujibur Rahman and praying for his departed soul.

In his speech Planning Minister M A Mannan, MP said, In this month of mourning, together let’s build a Bangladesh free of poverty and hunger, that will be our tribute to Father of the Nation Bangabandhu Sheikh Mujibur Rahman.

ICT State Minister said, Bangabandhu established the first satellite earth station at Betbunia in Rangamati. By following his footsteps, Bangladesh achieved the success of launching the Bangabandhu Satellite-1 in space. He urged all concerned to strengthen the hands of Prime Minister Sheikh Hasina in building a technology-oriented digital Bangladesh following Bangabandhu’s ideology.

A. K. M Rahmatullah MP said, Bangabandhu isn’t only the leader of a party, he is the leader of the nation, he is one of the most influential leaders of the world. Today we humbly remember Architect of Independence, Father of the Nation Bangabandhu Sheikh Mujibur Rahman.

BASIS members, members of BASIS Students’ Forum, respected journalists from print, electronic and online media were present at the program.