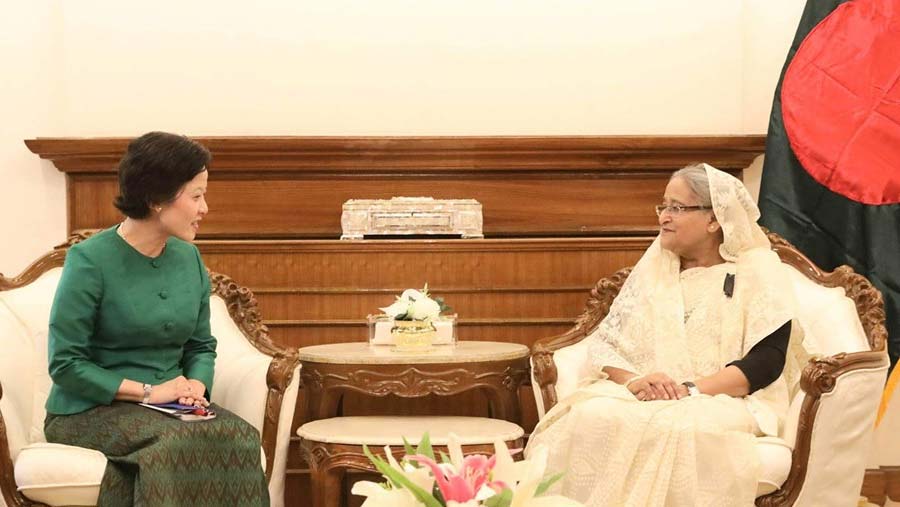 Bangkok has assured Dhaka of continued support for expeditious repatriation of the Rohingya people, who fled to Bangladesh in the face of atrocities in their homeland in Myanmar. The assurance came when newly appointed Ambassador of Thailand to Bangladesh Arunrung Phothong Humphreys paid a courtesy call on Prime Minister Sheikh Hasina at the Prime Minister’s Office in Dhaka on Wednesday (Aug 28).

“Thailand will continue to support Bangladesh for the expeditious repatriation of Rohingyas,” PM’s Press Secretary Ihsanul Karim quoted the Thai envoy as saying while briefing the media after the call on.

In reply, Sheikh Hasina said, “Rohingyas are a big burden for Bangladesh. They are the citizens of Myanmar and they must return to their homeland.”

Referring to Thailand’s 40-year friendly and cordial relations with Bangladesh, the envoy said she is committed to take the Dhaka-Bangkok ties to a new height.

The envoy also said that they are interested to work with Bangladesh in trade, industry and energy sectors. She informed the PM of introducing ‘Bangabandhu Chair’ in Bangkok University in Thailand.

The envoy highly praised the overall economic and social developments including achievement of high GDP growth saying, “It has been possible due to leadership and guidance of Prime Minister Sheikh Hasina.”

She congratulated the PM for being elected for the fourth time.

Describing Bangladesh’s position as a strategic point in South Asia due to its location, the envoy said, “It (Bangladesh) is the gateway to South Asia for those coming from the East and Bangladesh is now a very important country both at the regional and international forums.”

Sheikh Hasina said, “We give importance to the South East Asian countries, especially for trade and business.” She assured the Thai envoy of giving all out cooperation in discharging her duties in Bangladesh.

Expressing deep satisfaction at the present state of bilateral relations between the countries, she sought cooperation from Thailand particularly in agriculture sector and said, “Thailand can especially cooperate with Bangladesh in food processing industry as it has a success story.”

Regarding development of Bangladesh, the premier said, “Our aim is to eradicate poverty and ensure basic needs of the people in a planned way as dreamt by Father of the Nation Bangabandhu Sheikh Mujibur Rahman.”

She said her government has been able to reduce the poverty rate to 21.4 percent and increase the per capita income to USD 1909. The PM put emphasis on making connectivity with Thailand in all ways particularly in waterways.

About security, she said, “The government has been pursuing a zero tolerance policy against terrorism.”