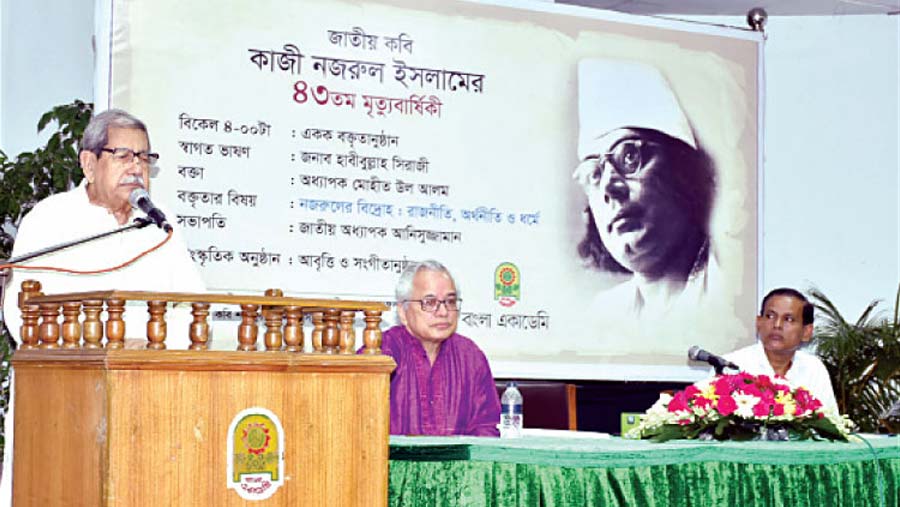 The 43rd death anniversary of National Poet Kazi Nazrul Islam was observed in a befitting manner on Tuesday (Aug 27).

The poet breathed his last at the then PG Hospital, now Bangabandhu Sheikh Mujib Medical University Hospital in the city, on 12 Bhadra of Bangla calendar year in 1383 (Aug 29, 1976).

In accordance with a wish which he had expressed in one of his poems, he was buried beside the central mosque of Dhaka University.

The programmes of the day began with Qurankhwani after Fazr prayers at the Dhaka University Central Mosque adjacent to the grave of the national poet. Later, teachers, students, officers and employees of the university assembled at the foot of ‘Aparajeyo Bangla’ sculpture from where a procession led by DU Vice-Chancellor Professor Md Akhtaruzzaman proceeded towards the grave of the poet at around 7:15 a.m.

They paid glowing tributes to the poet by placing wreaths at his grave. Besides, special prayers (Fateha) were offered at the poet’s grave seeking eternal peace of his departed soul.

A discussion along with a cultural programme was held with DU VC in the chair.

Bangla Academy organised a solo speech in the afternoon marking the day with Professor Dr. Anisuzzaman in the chair.

Bangladesh Awami League leaders and workers paid rich tributes to the poet by placing floral wreaths at his grave in the morning while a special prayer was also offered for Nazrul on DU Central Mosque premises.

Besides, leaders of Bangabandhu Sangskritik Jote arranged programmes including discussion, musical show and recitation on the poet.

Nazrul was a poet, lyricist, musician and philosopher. The nation got inspirations from Nazrul’s poems and songs during the great Liberation War and all democratic movements and struggles.

Nazrul wrote more than 3,000 songs which are known as Nazrul-Geeti or Nazrul Sangeet. Nazrul also composed some songs.

After the independence of Bangladesh, Father of the Nation Bangabandhu Sheikh Mujibur Rahman brought the poet to Dhaka from Kolkata along with his family. Then, Bangabandhu provided a residence for the family of the poet in the city’s Dhanmondi.

In January 1976, he was accorded the citizenship of Bangladesh.