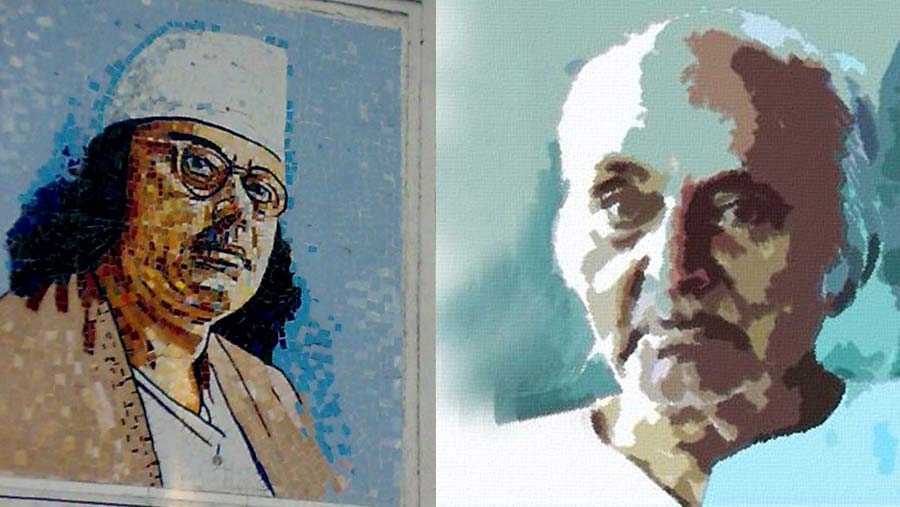 Nazrul, revered as Bidrohi Kobi (a rebel poet) for his activism for political and social justice, breathed his last in Dhaka on 12th Bhadro of Bangla calendar year 1383 (Aug 29, 1976) at the age of 77. He was buried with full state honour beside the Dhaka University Central Mosque.

Nazrul produced a large body of poetry and music with themes that included religious devotion and spiritual rebellion against all sorts of oppression.

Different socio-cultural and political organisations are marking the day with various programmes. TV channels are airing special programmes on Nazrul’s works and life.

The programmes began with Qurankhawani after Fajr prayers at Dhaka University Central Mosque by different organisations. Later, DU teachers and students and other political and socio-cultural organisations placed wreaths at the grave of the national poet in the morning.

Bangla Academy will organise a discussion in the afternoon on the occasion. Many other organisations are also arranging special programmes featuring discussion and musical events across the country.

Nazrul’s powerful poems inspired people to fight against all kinds of odds and injustice and repression during the colonial rule while his songs and poems were also a great source of inspiration for the freedom fighters during the country’s Liberation War in 1971.

Kazi Nazrul Islam earned the label rebel poet because of his contribution to the anti-colonial movement. His literary work often merged with his political activism. Nazrul contributed to almost all the genres of Bangla literature and became even more popular for the songs he composed as protest and as part of his creative process.

In his short creative career spanning just over 21 years, before he lost his speech and memory, Nazrul penned more than 3,000 songs, 600 poems, three novels and 43 essays and others.

Born into a poor family on May 24, 1899 or 11th Jaishthyo, 1306, at Churulia under Asansol of Bardhaman in undivided Bengal, Nazrul had to leave his study at an early age to earn his living.

At the age of nine, Nazrul joined a Churulia-based professional leto troupe to earn his livelihood. While working for the troupe, he was introduced to works of Bangla and Sanskrit literature. A year later, he resumed education and got enrolled at Matharun English School but dropped out from class six due to poverty.

This time, he worked with a Kobi Gaan troupe and subsequently took up a job at a bakery shop. At this stage of his life, Nazrul started writing poems and his talent soon grabbed the attention of a police officer, who gave him shelter in his house at Trishal in Mymensing and got him enrolled in class seven at Darirampur School.

In 1917, Nazrul joined the 49 Bengal Regiment of British Army as a soldier. While in the service for two and a half years, he was introduced to Persian literature and learned to play different musical instruments.

His literary practice took a formal shape during his army days: his first poem 'Mukti', first story 'Bounduler Attakahini', and a number of other writings such as 'Byathar Daan' and 'Meher Nigar' were published.

After the abolishment of the 49 Bengal Regiment by the British Army in 1920, Nazrul wandered around for a while and dedicated himself to writing revolutionary poems, essays and other writings.

He started a fortnightly magazine, Dhumketu, in August 1922.

In his prolific creative life, Nazrul also worked as a music composer for popular music brand HMV. He acted in the film Bhokto Dhrubo, for which he also penned, composed and directed the music.

Nazrul also worked for another film entiled 'Patalpuri' (1935), as a music director. He joined the All India Radio Calcutta sometime between 1938 and 1939.

In 1972, an ailing Nazrul was brought to Bangladesh. He was conferred the Ekushey Padak in 1976.