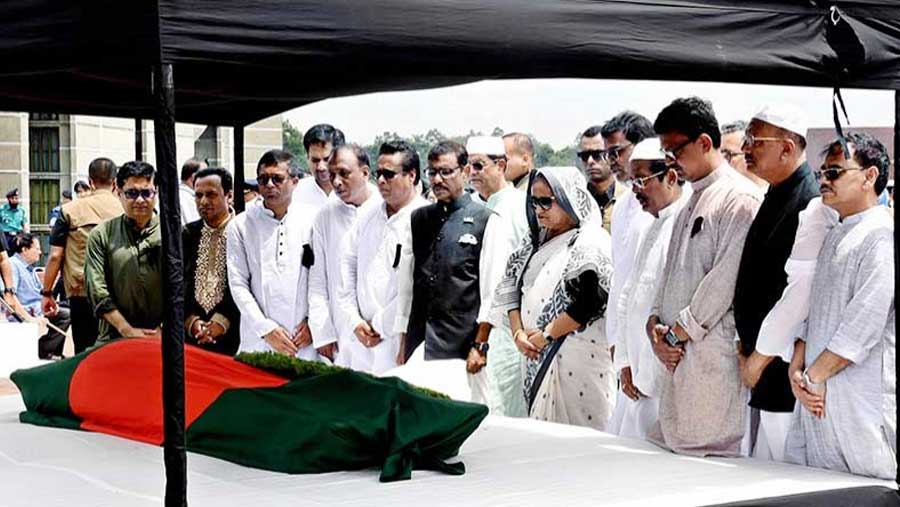 Prime Minister Sheikh Hasina today paid rich tributes to one of the political luminaries of the country and Bangladesh National Awami Party-NAP (Muzaffar) President Professor Muzaffar Ahmed. The PM paid the homage by placing a wreath on his coffin draped with the red-green national flag at the South Plaza of Jatiyo Sangsad Bhaban in the morning, local media reported.

After laying the wreath, the premier stood in solemn silence for some time as a mark of profound respect to the memory of Prof Muzaffar, also a member of the advisory council of the Mujibnagar government that led Bangladesh’s Liberation War in 1971.

Flanked by senior leaders of the party, Sheikh Hasina, also the Bangladesh Awami League president, placed another wreath on the coffin of Prof Muzaffar on behalf of her party.

Earlier, a wreath was placed on the coffin of Prof Muzaffar on behalf of President Md. Abdul Hamid. A Munajat was offered on the occasion, seeking eternal peace of the departed soul of Prof Muzaffar.

The PM, the speaker, ministers, parliament members and leaders of different political parties joined the Munajat.

Earlier, the first Namaz-e-Janaza of the NAP president was held at South Plaza of Jatiyo Sangsad Bhaban at 11 a.m.

Prof Muzaffar, who was the NAP president for over five decades, breathed his last around 8 p.m. on Friday (Aug 23) in the city’s Apollo Hospitals.