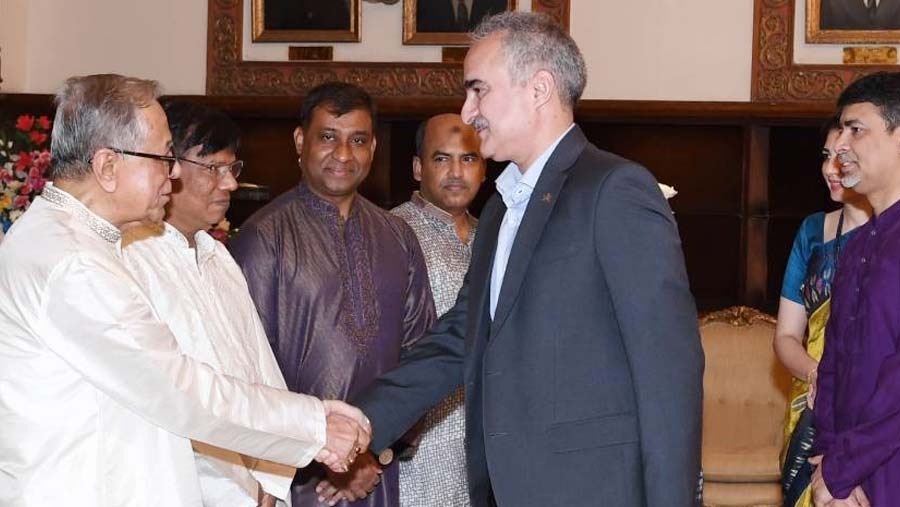 President Md. Abdul Hamid today urged people of all religions to maintain the country’s existing communal harmony to attain national development and progress. The President came up with the call while speaking at a reception hosted for Hindu community representatives at Bangabhaban here on the occasion of Janmastami, a festival to celebrate the birth of Krishna, the eighth avatar of Vishnu, local media reported.

“Bangladesh is a country of communal harmony and people of all religions have been performing their respective religious rituals amid harmony and amity since long…utilise this tradition for national development and progress,” he said.

Noting that mutual good relations and respect can play very important role in building an inclusive society, President Hamid laid emphasis on maintaining good family ties which has got importance in all the religions.

“Due to changes in family structures, gradual urbanization and modernization, people’s business has increased. So, the family bond is getting lost and the degradation of social values and different untoward incidents are taking place,” he observed.

The head of the state asked all not to remain busy with own only and to play a responsible role in removing wrong, injustice and superstition from the society.

He simultaneously urged all not confine the Janmastami programme to merely the occasion and festival but to use this as an endeavour to build a welfare society.

And then it would be possible to build a happy and prosperous “Shonar Bangla” as envisioned by Father of the Nation Bangabandhu Sheikh Mujibur Rahman, the President added.

Greeting the people of Hindu community on the occasion, he said the main ideal of Sri Krishna was to build the ties of real love and harmony among the people removing all sorts of injustice, repression, torture and conflict from society.

Abdul Hamid mentioned that Sri Krishna, according to Hindu religion, emerged as a social reformer to thwart evil forces and protect religion and good people in the society.

The President called upon all irrespective of religion and caste to forge unity for building a prosperous and nonviolent society.

Secretaries concerned accompanied the President during the reception.

After then, the President went round different corners of the Durbar Hall and exchanged greetings with them.

They also presented bouquets to the President.

Lawmakers, judges, ambassadors and high commissioner of India to Bangladesh, senior journalists of the Hindu community, among others, also joined the reception.

The invited guests were entertained with traditional food items at the Durbar Hall.