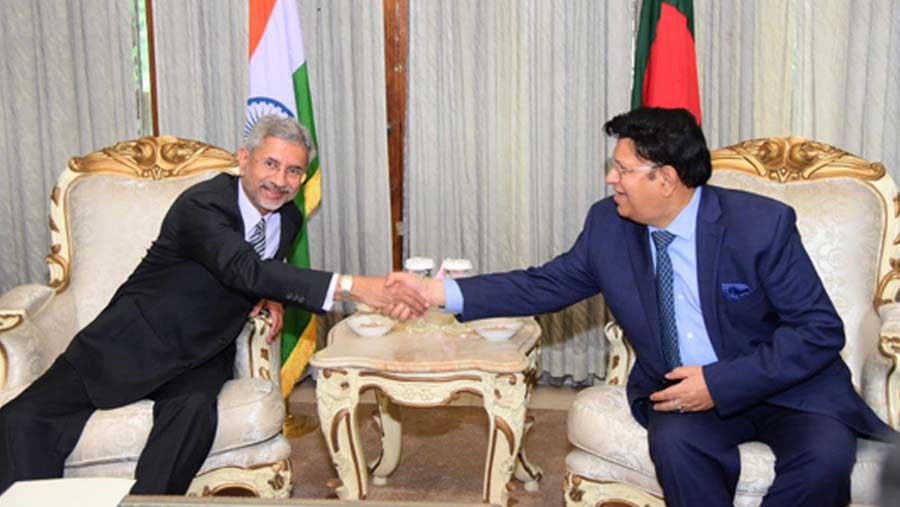 “We have agreed the safe, speedy and sustainable repatriation of Rohingyas to their place as it is the national interest of all the three countries-Bangladesh, India and Myanmar. We reaffirm our readiness to provide all assistances to repatriate the displaced Rohingya people from Bangladesh and to improve socio-economic condition in Rakhine state,” he said.

The Indian foreign minister made the remarks while briefing reporters after a bilateral meeting with his Bangladesh counterpart Dr A K Abdul Momen at the state guesthouse Jamuna in the city, local media reported.

Jaishankar said the relationship between India and Bangladesh is very strong and it will increase further. “We are also looking forward to celebrating both the centenary of Bangabandhu and the 50-year anniversary of Bangladesh’s independence,” said the Indian external minister.

“This is my first visit in Dhaka as external affairs minister . . . Our partnership with Bangladesh remains an example what neighbours can do together. We work together as partner. Our Prime Minister Narendra Modi is determined to ensure partnership that remains as a role model in the South Asia,” he added.

He said India is one of the development partners of Bangladesh and his country will give all possible supports to its close door neighbour Bangladesh for development.

“We feel honoured to be a leading development partner of Bangladesh. We like to offer all possible support to implement Bangladesh’s development agenda,” said Jaishankar.

About the water sharing issue, the Indian minister said water resource is an important subject for Bangladesh and they look forward to make its progress to find a mutually acceptable formula from 54 common rivers.

“We are ready to make a start wherever possible,” he added.

Responding to a question regarding the long pending water sharing of the Teesta River, he said, “We have a position you are aware of that. We have a commitment on that position and that does not change.”

Jaishankar said the relations are more than strategic partnership and it’s his ‘privilege’ to be associated with this relationship earlier as the foreign secretary and today as the foreign minister.

“We believe that when it comes to security, improved partnership against crimes, terrorism and extremism will yield direct benefit for the people of both the countries,” he added.

He said connectivity between the two countries has been increased on all routes, he said, adding that steps will be taken to boost the connectivity further.

Regarding the energy cooperation, he said both the countries have stakes in each other’s success.

On people-to-people ties, he said India operates the largest consular service in Dhaka and “We want to make it seamless”.

Earlier, the Indian External Affairs Minister visited the Bangabandhu Museum at Dhanmondi in the morning to pay respect to Father of the Nation Bangabandhu Sheikh Mujibur Rahman.