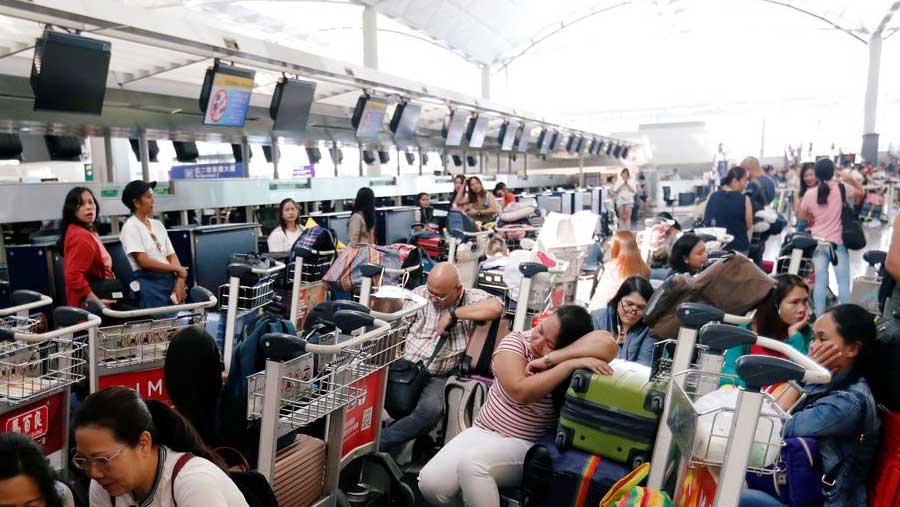 Flight check-in has been suspended at Hong Kong International Airport for a second consecutive day because of anti-government protests. The airport, which is one of the world's busiest, has been the site of protests for five consecutive days.

Videos on social media show passengers struggling to get through demonstrators, who have been sitting inside blocking departures.

The city's leader, Carrie Lam, earlier issued a fresh warning to protesters. Ms Lam said Hong Kong had "reached [a] dangerous situation" and that violence during protests would push it "down a path of no return".

As crowds continued to gather, Hong Kong airport officials announced that all check-ins were suspended from 16:30 local time (10:30 GMT) on Tuesday.

Some images from inside the airport appeared to show protesters using luggage trolleys to build barriers and some passengers becoming distressed.

Monday's disruption had already led to hundreds of flight cancellations at the airport - one of the busiest international transport hubs.

Mass unrest has rocked Hong Kong for 10 weeks and shows no signs of abating. Large protests started in response to a proposed extradition bill, which has now been suspended, but have evolved into a more demanding pro-democracy movement.

Protests are fuelled by fear that the freedoms Hong Kong enjoys as a special administrative region of China are being eroded.

On Tuesday the UN High Commissioner for Human Rights, Michelle Bachelet, urged authorities to exercise restraint in their response to protests.