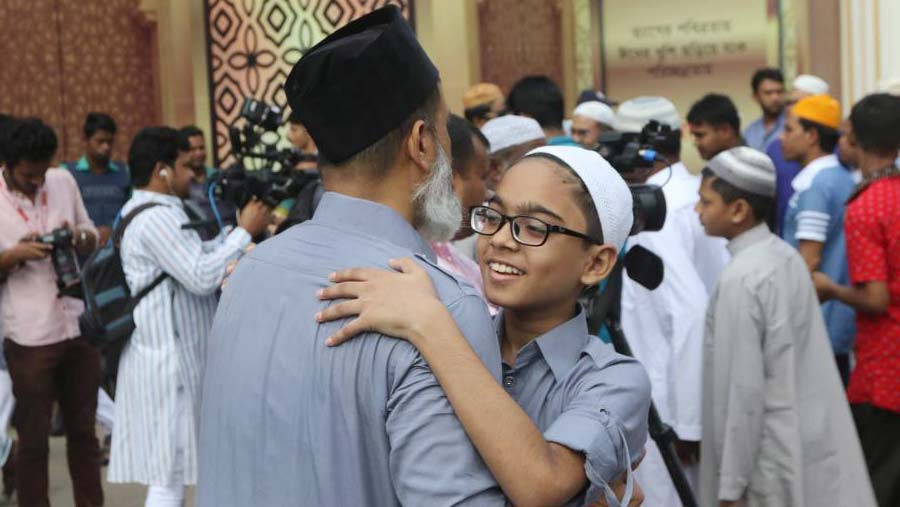 The holy Eid-ul-Azha, the second biggest religious festival of the Muslims, will be celebrated across Bangladesh on Monday (Aug 12) with due solemnity and religious fervour.

The Eid-ul-Azha is celebrated on the 10th of Zilhajj month of the Hizri calendar as Hazrat Ibrahim (AS), on this day, some 4,500 years ago, offered to sacrifice his beloved son Hazrat Ismail (AS) who willingly submitted to the will of his father to please Allah. But the Almighty in His benign mercy spared Hazrat Ismail (AS) and instead sent a ram to be sacrificed. To commemorate this historic event, the Muslims across the country will offer prayers in congregations and sacrifice animals in the name of Almighty Allah. They will offer munajat seeking divine blessings for peace, progress and prosperity of the country as well as welfare of the Muslim Ummah.

President Md. Abdul Hamid and Prime Minister Sheikh Hasina issued separate messages, greeting the Muslims in Bangladesh and all over the world on the occasion of the Eid-ul-Azha. President Hamid will exchange Eid greetings with the cross sections of people, including eminent citizens and diplomats at his official Bangabhaban residence on the day at 10:30 a.m.

Prime Minister Sheikh Hasina will also exchange greetings with the cross sections of people, including party leaders and workers, judges and foreign diplomats, at her official Ganabhaban residence on the day from 10 a.m. to 11 a.m.

The premier will exchange Eid greetings with judges, the cabinet secretary, the chiefs of the three services, foreign diplomats, senior secretaries, secretaries and other civil and military officials from 11 a.m. at the same venue, local media reported.

Organizers said adequate water supply and security arrangements have already been made at the Baitul Mukaram National Mosque to facilitate the Eid-ul-Azha prayers.

One Eid congregation will be held at the south plaza of the Sangsad Bhaban at 7.30 a.m.

Two Eid congregations will be held at the Dhaka University central mosque Mosjidul Jamiah — the first one at 8 a.m. and the second one at 9 a.m. Eid Jamaat will be held on Salimullah Muslim Hall field, Dr Muhammad Shahidullah Hall lawn, Uttar Nilkhet premises and Baitus Salam Jam-e-mosque of Giasuddin Ahmed Residential Area.

Eid congregation will also be held at Masjid-e-Baitul Haram at Lalmatia.

Besides, like the previous years, the largest Eid congregation will be held on Sholakia field in Kishoreganj at 8:30 a.m. Two special trains named ‘Sholakia Special’ will be run on Bhairav-Kishoreganj and Mymensingh-Kishoreganj routes so that devotees can participate in the jamaat.

Adequate security measures have been taken for peaceful and smooth celebration of the holy Eid-ul-Azha. The law enforcement agencies were also asked to ensure smooth movement of vehicles on highways, waterways and train routes. Railway stations, bus and launch terminals were seen overcrowded for the last few days as home-goers are heading for their desired destinations.

Makeshift cattle markets in the city as elsewhere have been witnessing a rush of buyers for sacrificial animals.

State-run Bangladesh Television, BTV and Bangladesh Betar and other TV channels and radio stations would broadcast special programmes on the occasion of the Eid-ul-Azha.

On the day, improved diets will be served to inmates of government hospitals, prisons, orphanages, safe homes and shelter centers.

The government earlier declared three-day public holiday on the occasion.