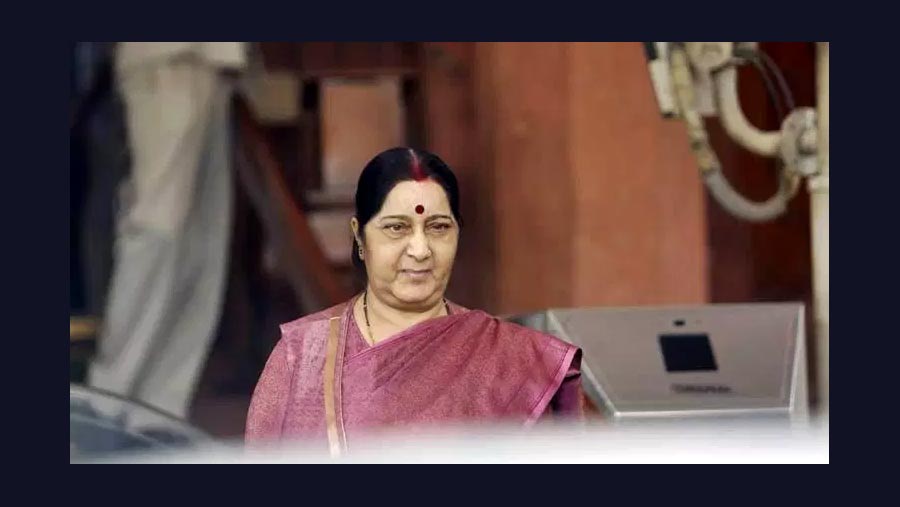 Sushma Swaraj, India's former external affairs minister and a leader of the ruling Bharatiya Janata Party, died Tuesday (Aug 6) at a hospital in New Delhi. She was 67. Sushma died of a heart attack and was rushed to the emergency ward of All India Institute of Medical Science hospital, Indian media reported.

Sushma was the external affairs minister in Prime Minister Narendra Modi's cabinet from 2014 to 2019. She distinguished herself with an active presence on social media, often replying to requests for help from Indians abroad.

After undergoing a kidney transplant during her tenure as minister, Sushma decided not to run for this year's general election, citing health issues.

“India grieves the demise of a remarkable leader,” Prime Minister Narendra Modi has tweeted after the death of Ms. Sushma.

Sushma received a law degree and began her political career in the 1970s closely associated with socialist leaders. She actively opposed an emergency rule imposed in 1975 by then-Prime Minister Indira Gandhi of the Congress party. She later joined the Bharatiya Janata Party and rose to become one of its top leaders, last serving as India's foreign minister, only the second woman in the role after Indira Gandhi.

She was a member of the Haryana state legislature from 1977 to 1982 and again from 1987 to 1990. She then entered national politics and served as information and broadcasting minister, parliamentary affairs minister and health minister.

She also served as the chief minister of Delhi in the late 1990s.

Sushma is survived by her husband, Swaraj Kaushal, a senior advocate of the Supreme Court of India and a former governor of Mizoram state, and a daughter, Bansuri, also an advocate.

J.P. Nadda, working president of the BJP, said Swaraj's body will be kept at the party office on Wednesday for people to pay homage and cremated later in the day.

Prime Minister Sheikh Hasina has expressed condolence and sorrow at the death of Sushma Swaraj. In her condolence message, the Bangladesh premier who is now in London, said, “Sushma Swaraj was a good friend of Bangladesh. In her death we’ve lost a true friend,” PM’s Press Secretary Ihsanul Karim said this to reporters on Wednesday (Aug 7).

Besides, PM Sheikh Hasina remembered her contributions to taking the bilateral relationship to a new height. She also prayed for salvation of the departed soul and conveyed profound sympathy to the bereaved family.