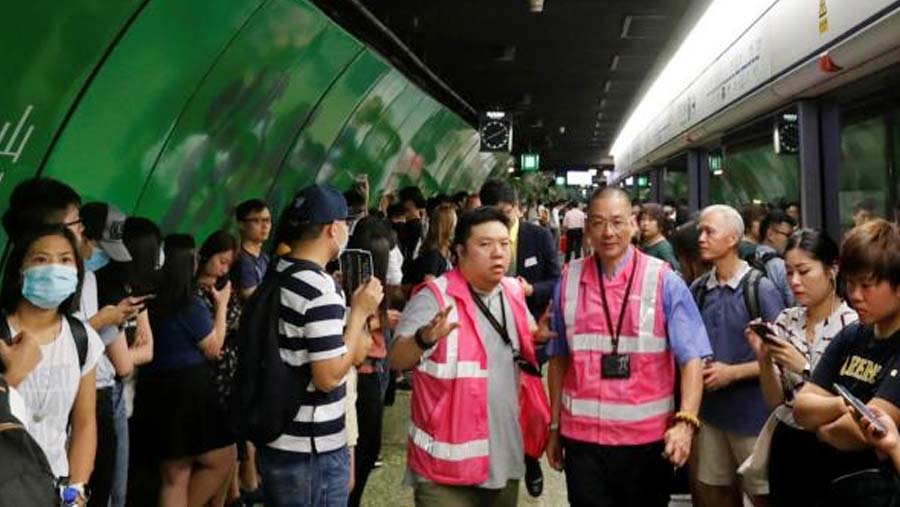 Hong Kong's leader has warned that the city is on "the verge of a very dangerous situation" after protesters blocked roads and paralysed train services during morning rush hour.

More than 14,000 people from 20 sectors vowed to join a city-wide strike on Monday (Aug 5), its organisers said.

Civil servants, who are ordered to be politically neutral, have reportedly agreed to take part.

At the airport, more than 200 flights were cancelled amid disruption fears.

The protests have now continued for nine consecutive weekends. After violent clashes on Saturday and Sunday, police again fired tear gas at protesters on Monday.

In her first media address in two weeks, the city's leader Carrie Lam said the protesters' actions had challenged the principle of "one country, two systems" and were threatening prosperity and stability in Hong Kong.

She also accused activists of using a controversial extradition bill, which triggered the protests in June, as a cover for their real goals.

"We continue to allow these violent protesters to make use of the [extradition] bill to conceal their ulterior motives," she said. "Those ulterior motives are going to destroy Hong Kong."

Ms Lam reiterated that she would be not be stepping down - something protesters have repeatedly called for.