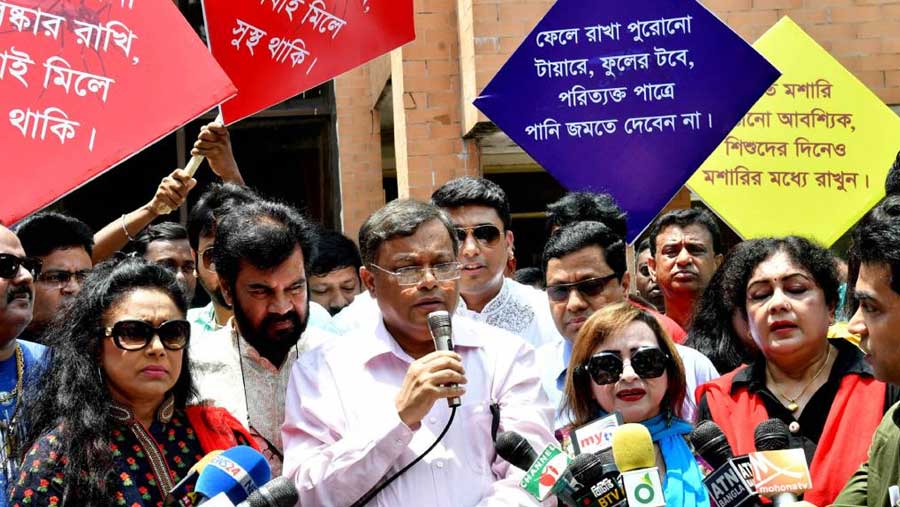 Urging physicians to stand by dengue patients on humanitarian ground, Information Minister Dr Hasan Mahmud on Friday (Aug 2) accused some doctors of trying to utilise dengue prevalence as a means of business.

Most of the physicians have already stood by the dengue patients on humanitarian ground, but a section of doctors is trying to utilise the dengue prevalence as a means of business, he said while inaugurating a cleanliness and mosquito killing drive on the premises of Bangladesh Film Development Corporation (BFDC) in Dhaka.

Hasan said physician leaders should take steps so that nobody can use the dengue prevalence as a tool of business.

He said, Swadhinata Chikitsak Parishad already stood by people and instructed its members, if necessary, to provide treatment to the dengue patients free of cost.

He said many people have been admitted to hospitals or are taking treatments at their homes suffering from dengue fever due to the deadly aedes mosquito.

The government has already taken initiatives to prevent dengue. But, everyone should clean up their respective homestead premises and surroundings, as well as destroy mosquito breeding grounds so that the deadly aedes mosquito could not spread, the information minister said.

He pointed out that Prime Minister Sheikh Hasina has already instructed the authorities concerned to face the dengue situation together. That is why the Bangladesh Awami League alongside the government has taken a programme in this regard, he added.

He hoped that the cleanliness and mosquito killing drive carried out today with participation of film artistes will help encourage the country’s people to prevent dengue spread.

Hasan, also the Awami League publicity and publication secretary, said Prime Minister Sheikh Hasina has already announced that the aedes mosquito will be no more. “I think if we work together to fight dengue, we would be able to cope with the menace,” he added.

Rumours are being spread over dengue outbreak through social media and a vested quarter will also try to spread rumours in the future, the information minister said, calling upon people not to pay heed to any rumour.