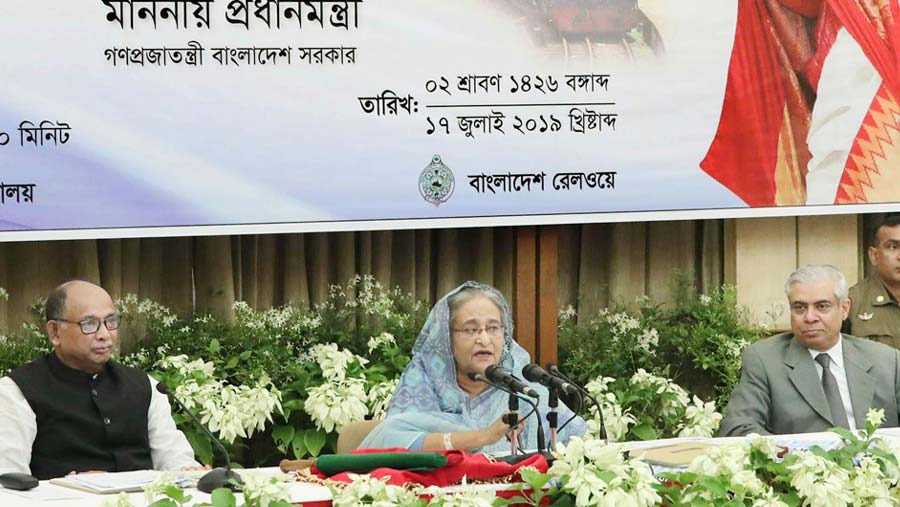 Prime Minister Sheikh Hasina Wednesday (Jul 17) asked the authorities concerned to modernise and repair the rail lines and bridges and said that the government has a plan to introduce electric and high speed trains in the country.

“Procuring new coaches, locomotives and engines is not enough for development of the rail sector. Alongside, rail lines and bridges will have to be modernised and developed,” she said.

The PM said this while inaugurating Benapole Express, a new intercity train to ply between the capital Dhaka and the country’s largest land port at Benapole, through a videoconference in the morning. She opened the train by flagging off and blowing whistle through the videoconference from her official Ganabhaban residence in Dhaka, local media reported.

The PM said the present government has a plan to introduce electric train in the country alongside high speed trains to make the rail service faster and comfortable.

“Communication is very important for development. So it’s our aim to modernise the rail service and make it dynamic and take the communication to the people’s doorsteps,” she added.

Through the same function, the premier inaugurated the extension of Dhaka-Rajshahi non-stop intercity ‘Bonolata Express’ train service to Chapainawabganj.

The PM said the government has developed the road, river and air ways, like that it has set up a separate rail ministry by allocating separate budget for it.

“There are such people who didn’t see rail lines and we’re taking rail lines to those places … in this way, we’re building a rail network,” she said.

Sheikh Hasina also directed the authorities concerned to recruit necessary manpower for the railways and impart time befitting training to make them to make capable of operating such modern trains.

“New manpower will have to be recruited side by side purchasing new engines, coaches and locomotives to raise capacity of the rail services,” she said.

“I thank the ADB for giving a new lease of life to the railway,” she said.

Not mentioning the name of any organisation, Sheikh Hasina said there is another international organisation which wanted to close down the rail services.

Sheikh Hasina said, by introducing rail lines on Bangabandhu Bridge over the Jamuna River, the government made the bridge a multipurpose one.

The premier said the construction of the country’s biggest bridge over the Padma River is progressing fast.

On completion of the Padma Bridge, she said, a railway junction will be established at Bhanga and rail network will be expanded up to Jashore via Faridpur.

“As a result, the distance on Dhaka-Benapole route will reduce by 180 kilometres, while the travel time from Dhaka to Benapole will also cut by nearly 4/5 hours,” she said.

About the new trains, the prime minister said these are gifts of her government for the people of Rajshahi and Khulna divisions ahead of the upcoming Eid-ul-Azha.

On extension of Dhaka-Rajshahi non-stop intercity ‘Banolata Express’ train service to Chapainawabganj, she said harvesting of mango season is underway in the country.

“The mango farmers of Chapainawabganj would be able to market their mango easily and thus will benefit economically after the expansion of ‘Bonolata Express’ to their district,” she said.

Railways Minister Nurul Islam Sujon and ADB Country Director Manmohan Prakash also spoke at the function, while Secretary of the Ministry Mofazzal Hossain made a power point presentation on the overall development of the sector.

Later, the PM talked to the cross section of people including public representatives, guardians, students, officials, passengers of Benapole and Chapainawabganj through the videoconference.

The Benapole Express train with 896 seats in 12 compartments will travel between Benapole and Dhaka every day with stopovers in Ishwardi, Jashore and Dhaka Airport stations.

The coaches of the train were procured from Indonesia and already have gone for trial. People will be able to avail of the train service during their coming Eid journey.