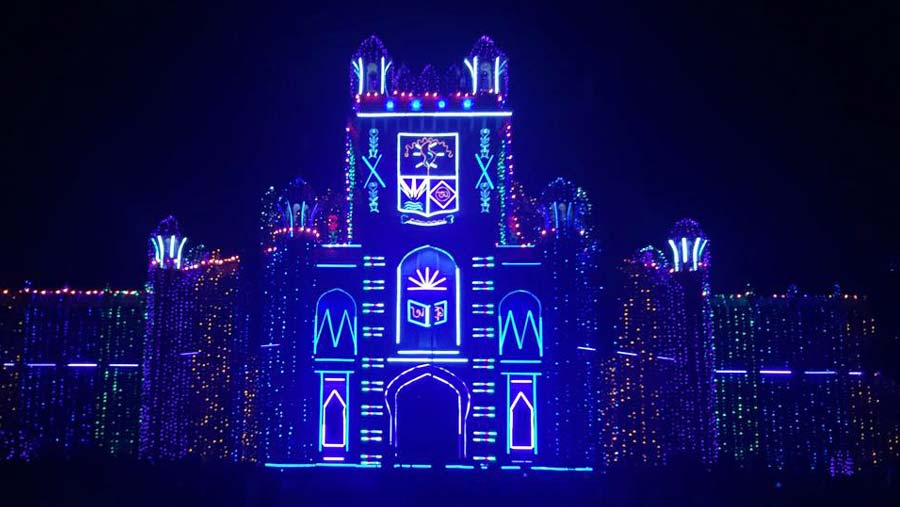 The country’s highest echelon of academic excellence Dhaka University (DU) is celebrating its 98th founding day Monday (Jul 1) amid festivity and in a befitting manner.

The university authority has chalked out elaborate programs to celebrate the day amid festivity and fanfare. DU Vice-Chancellor Professor Dr Akhtaruzzaman announced a day-long program to mark the day.

The day-long programs include: assembly of teachers, students and staffs in the morning at 'Mall Chattar' on the campus, hoisting of the national flag as well as DU flag, releasing of pigeons, cutting cake and arranging musical program and bringing out colorful procession.

A discussion meeting titled “Qualitative Education, Barriers and Solution” will be held at the TSC auditorium where Emeritus Professor Dr Serajul Islam Choudhury will present the keynote speech.

Arts Faculty building, Curzon Hall, TSC building and other important infrastructures of the university have been illuminated displaying dazzling lights. Rare manuscripts were exhibited at the university central library from 10 a.m. to 1 p.m. on that day.

Moreover, a friendly cricket match will be held between Dhaka University Central Students’ Union (DUCSU) and DU Journalists’ Association (DUJA) in the afternoon on the university central field.

The day is being observed to mark the launching of academic activities by the university on Jul 1, 1921.

Starting off with only 847 students in three faculties and 12 departments in 1921, the university has grown to accommodate over 43,385 students and 2,010 teachers in 84 departments and 13 institutes currently.

The DU has played a vital role in Bangladesh history. Its students and teachers had sacrificed their lives in the Language Movement in 1952, the Mass Upsurge in 1969, and the Liberation War in 1971.

The national flag of Bangladesh was first hoisted at 'Bot-tola' on the DU campus on Mar 2, 1971.