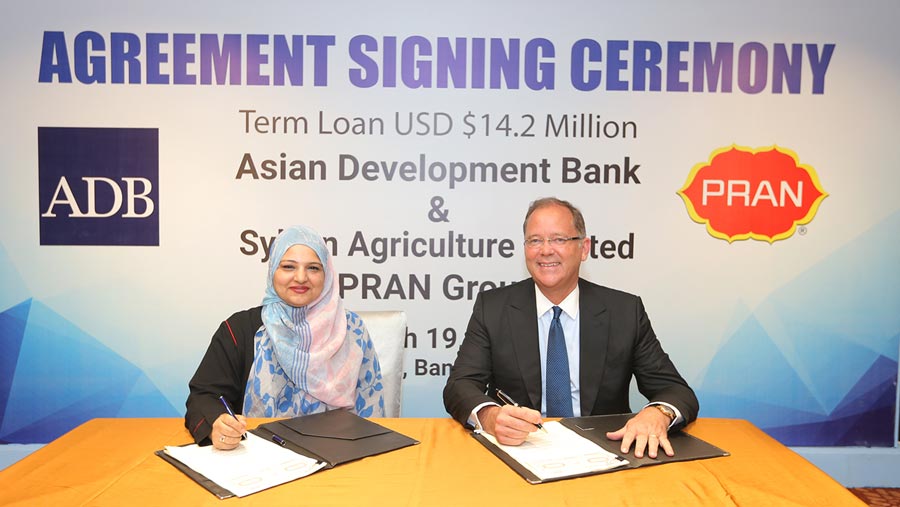 The Asian Development Bank (ADB) signed a $14.2 million loan to support the expansion plans of Sylvan Agriculture Limited (SAL), a PRAN-RFL Group company, to enhance inclusiveness in the agribusiness sector by lifting the incomes and skills of farmers — particularly women. PRAN is one of the largest food and agribusiness companies in Bangladesh.

ADB’s assistance will finance new food processing facilities to produce potato chips, potato flakes, and pasta. Under a gender action plan, women will comprise at least half of the 450 people directly employed in the new facilities. Gender wage gaps will be reduced, women’s facilities introduced, and greater technological assistance provided to women farmers.

“Agriculture plays a key role in Bangladesh’s economy and development, providing nearly half of all employment in the country and supporting over 70% of the total population,” said ADB Investment Specialist for Private Sector Operations Tushna Dora.

“ADB’s second loan to SAL will further improve the agribusiness sector in Bangladesh through increased private sector investment. It will enhance the livelihoods of thousands of local farmers, with a focus on empowering women to gain new skills that can be used to earn better incomes.”

Potatoes for the new processing facilities, located in Habiganj industrial park in the north-eastern part of Bangladesh, will be sourced from around 2,000 contract farmers, integrating them in a sustainable agricultural value chain. The project is expected to increase contract farmers’ income by at least 50% as they introduce new potato varieties, expand the area they cultivate, and benefit from the assurance that their production will be bought by SAL.

The project is ADB’s first repeat assistance to a private sector borrower in agribusiness. In 2012, ADB had approved a $25.1 million loan to SAL for the construction of processing facilities, including for liquid glucose and starch made from cassava sourced from contract farmers.

Uzma Chowdhury, Director (Corporate Finance) of PRAN-RFL Group and Christopher Thieme, Deputy Director General of ADB, signed the agreement at a city hotel in Dhaka on Tuesday. Ahsan Khan Chowdhury, Chairman and CEO of PRAN-RFL Group, Eleash Mridha, Managing Director of PRAN Group, Cai Li, Deputy Country Director of ADB for Bangladesh and other senior officials from both organization were present at the program.

PRAN produces more than 500 food products under 10 different categories including juices, mineral water, carbonated beverages, bakery products, snacks, biscuits, confectionary, and dairy products. It is one of Bangladesh’s largest private employers, with over 100,000 staff. In addition, the group has engaged with about 100,000 contract farmers across various crops.

ADB is committed to achieving a prosperous, inclusive, resilient, and sustainable Asia and the Pacific, while sustaining its efforts to eradicate extreme poverty. Established in 1966, it is owned by 67 members — 48 from the region.