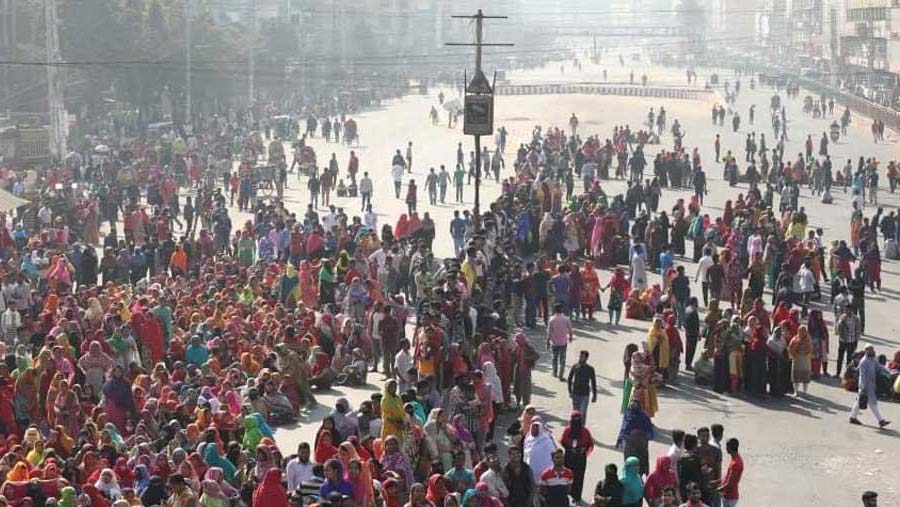 Workers of readymade garment factories continued their protest for the third consecutive day by staging demonstration in Uttarkhan and Dakhshinkhan areas in Uttara on Tuesday (Jan 8) demanding cancellation of the ‘‘discriminatory’’ wage board announced by the government for them.

The workers started to gather in front of their respective factories from 9 a.m. and tried to lay a siege on Dhaka-Mymensingh highway at the airport intersection. However, police foiled their attempt, witnesses said.

Later, the garment workers carried out vandalism at several factories in the area, creating panic among the local people.

Elswhere, a chase and counter chase took place between police and the workers on Kalshi road in Mirpur in the noon. Vehicular movement on a side of the road came to a halt following their blockade.

Besides, workers of garment factories on both sides of Rokeya Sarani in Pallabi area also staged demonstration that also halted vehicular movement in the areas for several hours since morning.

Meanwhile, Commerce Minister Tipu Munshi will hold the meeting with leaders of various groups and organizations that represent garments’ workers. State Minister for labour Munnujan Sufian will be accompanying him. The meeting will be held at the labour ministry in the afternoon, local media reported.

Garments workers started protesting from Sunday (Jan 6) over the disparity in pay in the new wage structure.