PM seeks vote for 'boat' in next polls 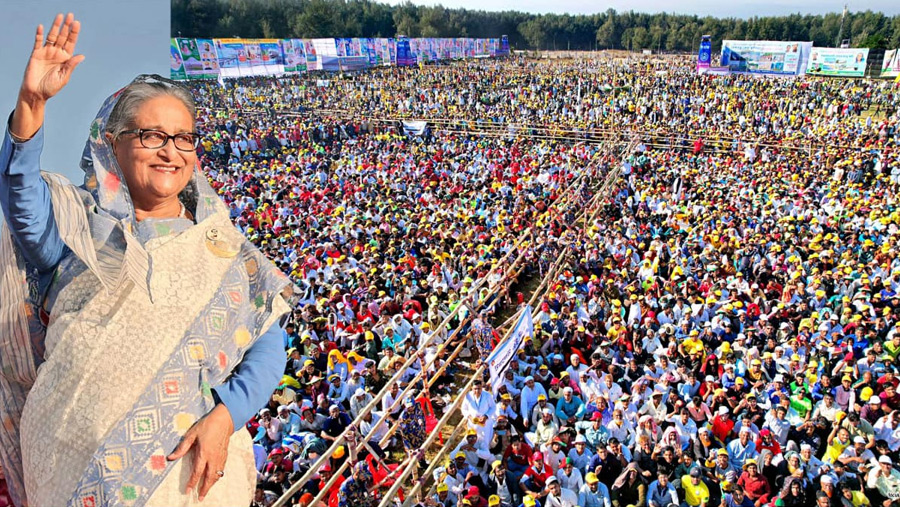 Prime Minister Sheikh Hasina on Wednesday (Dec 7) reiterated her call to the country people to vote for boat, saying that the next national election would be held in the first week of January 2024.

"After 2023, in the first week of January 2024, the next national election would be held. In this election, I seek your (people) vote for our electoral symbol boat." The premier said addressing a grand public rally at the Sheikh Kamal International Cricket Stadium, organised by the Cox's Bazar District Awami League, local media reported.

Seeking ballots for the boat, she urged the crowd to make a commitment by raising their hands that they would give the mandate for the boat.

Sheikh Hasina, also the President of the ruling Bangladesh Awami League, said that you people have given your vote for the boat and the present government has carried out development not only in Cox's Bazar, but also across the country.

She said that desired development of the country has been possible as the Awami League government is in power for three consecutive terms and Bangladesh has become a developing nation.

Expressing gratitude to the countrymen, she called upon all to vote in favour of Awami League again.

At the outset of the rally, the PM inaugurated 29 development projects and laid the foundation stones of four schemes involving Tk 1963.86 crore.

Mentioning various schemes taken by the incumbent government to minimize the struggle of the lower-middle class and lower-income group of people, the Prime Minister said as long as she is in power it is her responsibility to look after the countrymen.

"As the daughter of Father of the Nation Bangabandhu Sheikh Mujibur Rahman, it is my duty to look after your welfare as long as I am in the power," she said.

Talking about the Jamaat-BNP clique, she questioned what this nexus gives to the people of this country.

"Arson terrorism, killing, murder, looting, money laundering, smuggling country's money to abroad, and smuggling are the things what they can do," she said.

She also mentioned that Khaleda Zia embezzled money from the orphanage and for that reason; she is convicted for 10 years.

"And her son Tarique Zia, you all know that he was convicted for seven years and fined Tk 20 crore for siphoning off the country's money," she said.

Sheikh Hasina continued that Tarique Zia was involved in 10-truck arms smuggling. "I don't know for what purpose he would use those arms," she raised the question.

On Aug 21, 2004, Khaleda Zia and Tarique Zia and their companions had hurdled grenades, which were used in wars, on an Awami League rally resulting in 22 patry men death, said the Awami League chief.

"But, I narrowly escaped the grenade attack with the grace of Almighty Allah," she said.

She said that BNP always patronizes looters, militants and the people, who siphoned off the country's money and killed people through arson attacks.

When the BNP-Jamaat clique was in power during 2001-2006, they carried out bomb attacks at 500 places and thus, there was no security for people's life.

She said they set fire to buses, rails, cars, launches and everywhere, resulting in burn injury of 30,000 people and the death of over 500 people alongside the burning of over 3,500 vehicles.

"Can a human being kill another human being putting in the fire?... this BNP, Tarique Zia and Khaleda Zia's movement means killing people through arson attacks," she said, adding that "They do not know anything without destruction."

The PM said after the 1975 carnage, the governments of Zia, Ershad and Khaleda Zia during their 21 years of the regime didn't give anything to the people instead of looting the properties of the people.

The PM said she considered all of the countrymen as her own people and her only job is to do the welfare of the people of Bangladesh.

Mentioning that each person in village will get civic amenities, she said that her aim is to make every village a city and give a better life to every person.

"And that's why her government is making arrangements to change the fate of the people of Bangladesh by developing connectivity of roads, bridges, highways, railways, and waterways."

Sheikh Hasina also mentioned that the government has provided broadband internet services within the reach of rural people, set up digital centres at all union parishad level, opened up mobile phone services to the private sector, given the opportunity to open bank accounts for farmers at Taka 10, and provided agricultural equipment cards to two crores of people.

She also referred to various public welfare and poor-friendly programs taken by her government, such as providing scholarships to 2.53 crore students, distribution of free textbooks up to the secondary level and providing assistance in higher education from Father of the Nation's Education Assistance Trust Fund.

Today, Bangladesh has achieved the status of a developing country, but the government wants to make it a developed and prosperous country by 2041 as dreamt by Father of the Nation, the Premier said.

Referring to her government's projects of building houses for the homeless people, she said not a single person will be landless or homeless in Bangabandhu's Bangladesh.

Urging the people, who attended the rally, to find out whether there are landless-homeless people in their respective areas, Sheikh Hasina said her government will rehabilitate them if their names and addresses are enlisted by the authorities concerned.