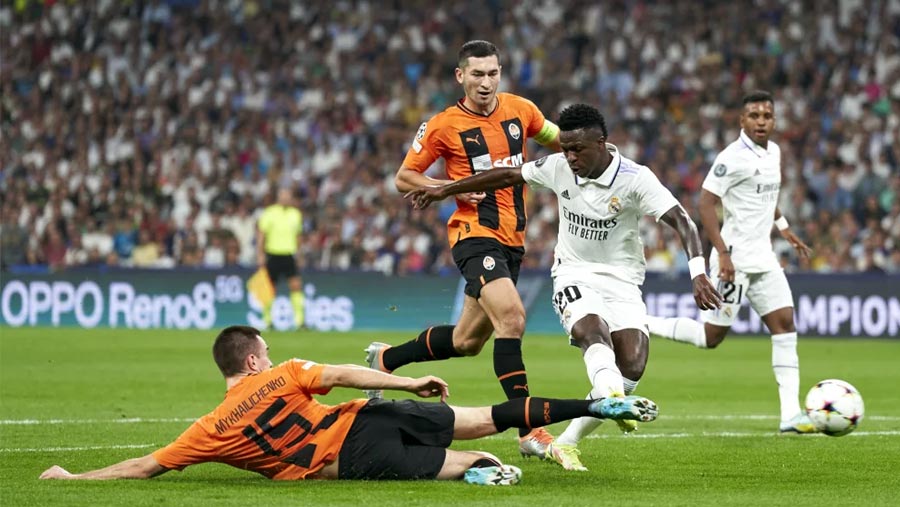 Real Madrid extended their perfect start to the UEFA Champions League group stage with a 2-1 victory which firm their superiority at home to Shakhtar Donetsk on Wednesday (Oct 5).

Real Madrid established a stranglehold at the top of their Champions League group with a 2-1 win over Shakhtar Donetsk on Wednesday (Oct 5), which should have been far more emphatic.

Carlo Ancelotti's reigning champions have a 100 percent record in the competition and made light work of their Ukrainian opponents, who had to travel 10 hours to get to Madrid because of the war in their homeland.

Rodrygo and Vinicius Junior's goals made the difference but the record 14-time winners were dominant and only profligate finishing – and fine goalkeeping from Anatoliy Trubin – stopped them from racking up a big lead.

After three games Madrid have a five-point lead on second-placed Shakhtar, with RB Leipzig, third, beating Celtic 3-1 in the other Group F match.

"There are days like this, when the ball doesn't want to go in," said Madrid midfielder Toni Kroos. "It was a game we could have won 7-1 or something like that, but in the end it's three points, that's the important thing.

"The idea is to qualify as soon as possible, we've got all the points we can, it's not possible to do better. We want to win next week too (against Shakhtar) and seal qualification."

Karim Benzema led the line again on his second match back after injury and although he was still rusty, it didn't matter on a mostly comfortable evening.

Rodrygo broke the deadlock with a low effort from outside the area, curled home after 13 minutes. He was not punished for a loose first touch as the ball bounced back to him and stroked it past Trubin.

Benzema, sniffing around for a goal to ignite his season, fired in a low effort which Trubin parried, as Madrid pinned the visitors back.

Vinicius, who left two Shakhtar defenders for dead by scooping the ball through the gap between them and darting through to delight the Santiago Bernabeu, soon added the second.

The Brazilian put the finishing touches on an intricate team move, with Benzema feeding Rodrygo, to caress the ball into the bottom corner.

Vinicius had another shot cleared off the line by Valeriy Bondar, with Madrid angling for a third to put the game out of sight, while Benzema slashed a volley off-target.

The overworked Trubin denied Vinicius and then Benzema in quick succession as Madrid poured forward, determined to right the wrongs of their draw with Osasuna on Sunday, the first points they have dropped all season in any competition.

However they were caught on the counter in the 39th minute, with Shakhtar's first attack of note resulting in a goal.

The unmarked Oleksandr Zubkov met Bogdan Mykhaylichenko's cross with an acrobatic finish to give the visitors a glimmer of hope.

"We had many chances, but we didn't take them," noted Ancelotti. "We lowered our intensity, and I gave them a talking-to at half-time, because the game was not over."

Trubin kept Rodrygo at bay in the second half with another good save and Vinicius should have hit the target after the ball broke to him near the penalty spot.

Madrid's inability to kill off the game led to a couple of nervy moments, but they maintained the best chances and Benzema was frustrated once more by the indefatigable Trubin, while Marco Asensio hit the post at the death.

"I told the players they were leaving the temple of football with their heads held high for what they did," said Shakhtar coach Igor Jovicevic, a former Real Madrid youth player.

"I told the players that against the monsters they had in front of them, it's normal that they control the game."

"We have a social responsibility with a country that is fighting for its liberty. For that reason, we have to give it all in every game. For me it was very special to return to the Bernabeu and experience their supreme fans."