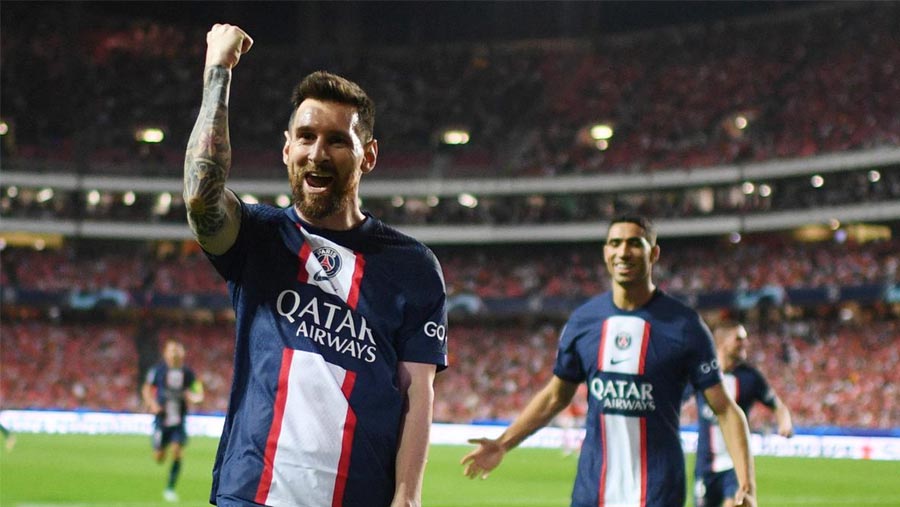 Paris Saint-Germain were forced to settle for a 1-1 draw away to Benfica in the Champions League on Wednesday (Oct 5) despite Lionel Messi's brilliant curling strike. The Argentina star scored midway through the first half in Lisbon but Danilo Pereira's own goal before the break ensured PSG and Benfica remain level at the top of Group H on seven points. Both clubs failed to win for just the second time this season in all competitions but are four points clear of Juventus, who bounced back from successive defeats to beat Maccabi Haifa 3-1 at home.

A superb Lionel Messi goal was cancelled out as Paris Saint-Germain and Benfica maintained their unbeaten Champions League records in an entertaining game in Portugal.

Messi opened the scoring with a curling shot after superb interplay with Neymar and Kylian Mbappe. However, Benfica earned a draw when Danilo Pereira turned an Enzo Fernandez cross into his own net.

The result means both sides have seven points from three games in Group H.

On this basis, Benfica and PSG both deserve a spot in the round of 16 as they played out a very entertaining encounter where only strong performances by goalkeepers Gianluigi Donnarumma and Odysseas Vlachodimos prevented the scoreline being much larger.

The opener came on 22 minutes and was vintage Messi. A superb team move in from the right side, Messi picked the ball up and combined superbly with fellow forwards Neymar and Mbappe before curling unstoppably into the back of the net.

Benfica are the 40th different opponent the Argentine has scored against in the Champions League, and this was a strike to sit alongside any of Messi's finest – but it was cancelled out on 41 minutes.

A floated cross from the left wing by Fernandez, after Neymar had sloppily given the ball away, deflected off Danilo and dropped inside the far post for an own goal.

The second half saw PSG apply plenty of pressure, and they hit the bar on 50 minutes when Neymar attempted a spectacular overhead kick following Vlachodimos denying right-back Achraf Hakimi one-on-one.

However both teams had to settle for a point, before they meet again in Paris next week.