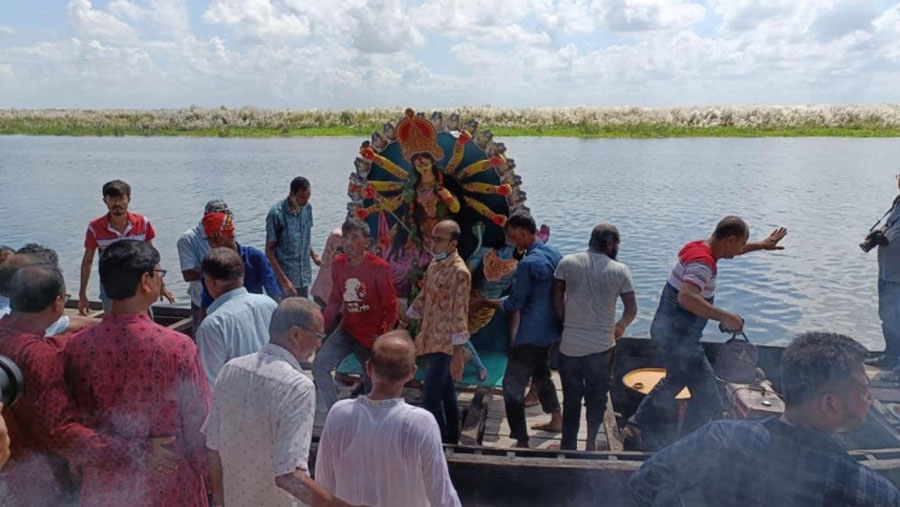 The five-day Durga Puja, the biggest religious festival of the Bangalee Hindu community and a few small ethnic groups, ended on Wednesday (Oct 5) with the immersion of the idols of Goddess Durga and her children in water bodies across the country amid festivity.

The idols of goddess Durga and her offspring – Ganesha, Karitik, Laxmi and Saraswati – were immersed at 4pm while the devotees received Shantijol (sacred water from where deities are immersed).

Before the emersion of the idols, mother deity Durga was bidden farewell by Darpan Bisharjan at 8.50 a.m. Amid tight security, idols of puja mandaps in the city and its outskirts were immersed in Buriganga and Turag rivers and Waisghat, local media reported.

The five-day annual celebration started with unveiling of the face of the deity and Kalparambho on Maha Shasthi on Oct 1 at temples across the country amid festivity and religious fervor.

Earlier, the incarnation (Bodhon) of the goddess Durga happened in the evening on September 30 ahead of the puja on the day of Maha Panchami.

During the five-day celebration, recitation of verses from the Holy Chandi, blowing of conch shells and beating of dhak-dhols at temples and pandals were held while a festive mood was witnessed among the devotees irrespective of ages marking the festival.

As per the puja schedule, Maha Nabami Puja was celebrated on Tuesday across the country.

Maha Nabami is believed to be the day when Durga defeated the evil Mahishasura and the Nabami rituals begin with a mahasnan and a Shodashopachar puja.

The Durga Puja was celebrated at 32,168 mandaps across the country this year including 241 in the capital, according to Bangladesh Puja Udjapan Parishad.

Earlier, the parishad in a press briefing informed that the number of puja mandaps was 32,118 across the country in the previous year.

In the wake of the coronavirus pandemic, the number of puja mandaps decreased slightly in the previous year but this year the number increased.

Swami Premananda Maharaj of Ramkrishna Mission and Ramkrishna Math, Dhaka, said that goddess Durga came to earth (martyalok) from heaven (Kailash) riding on elephant this year, which signifies, as per mythology, that the earth will witness natural disasters like storms but production of grains and crops will increase.

Goddess Durga returned to heaven (Kailash) riding on boat which signifies the world will get blessings, he added.

Durga Puja signifies the birth of Durga with the blessings of gods, as a collective energy, to fight the demon king Mahishasura.