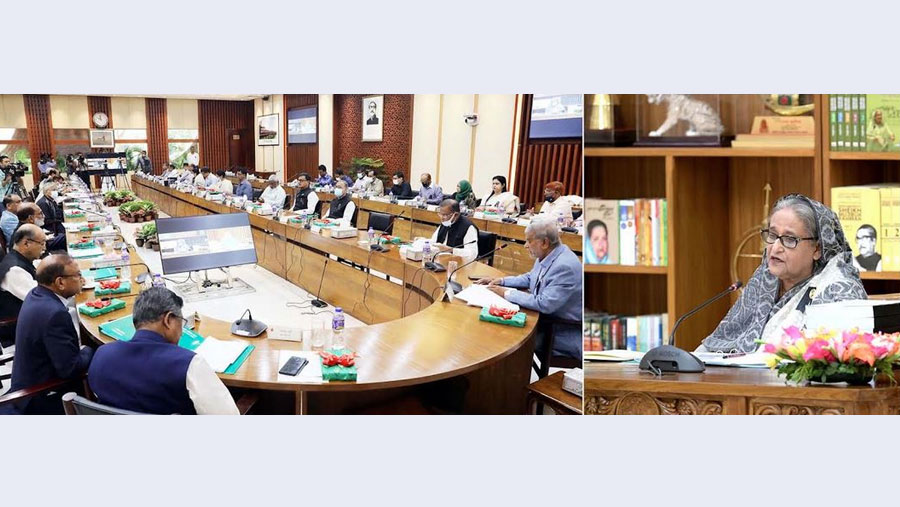 The PM was presiding over the Executive Committee of the National Economic Council (ECNEC) meeting joining virtually from her official Ganabhaban residence in Dhaka. Her cabinet colleagues were present at the meeting at NEC conference room in city, local media reported.

The premier expressed her apprehension that disastrous incidents might be Taken place in the country as conspiracy is usually hatched here whenever any move is taken to change the fate of the masses.

She asked all to remain alert against any bit to create any disastrous situation in the country.

Sheikh Hasina said the government can realise people's sufferings due to fresh surge in prices of essentials due to the global situation.

"I know essentials price has increased because of recent hike in fuel price for global situation. The lower, lower middle, middle and fixed income groups' people are suffering from essentials price hike. We can realise that," she added.

To ease the public sufferings, the PM said her government is going to sell rice at Tk 15 per kilogram (from Sep 1) to 50 lakh families alongside taking measures to sell essentials at a fixed price to one crore families through family cards.

"We believe we have to take some more measures so the commoners will not suffer from price hike. We are doing politics for the people and we feel hurt if they go through pain," she continued.

The PM said the price of essentials has shown increasing trend across the globe due to the Russia-Ukraine war, sanctions and counter sanctions alongside the ongoing Coronavirus situation.

"Everything has gone out of our purchasing capacity after imposing sanctions (due mainly to disruption in supplying food), though we have the ability of purchasing," she said.

The PM reiterated her call to increase production of food against the backdrop of the global crisis, asking to bring each inch of land under cultivation.

"We have to take measures to further increase food production which I have been saying since the outbreak of the Coronavirus," she said.

She said her government would provide all possible supports to farmers to increase food production.

The premier asked the agriculture minister present in the ECNEC meeting to take prompt measures to this end.

Referring to Aug 15, 1975 carnage in which Father of the Nation Bangabandhu Sheikh Mujibur Rahman and most of his family members were assassinated,  Sheikh Hasina said, "When the country had started its journey towards prosperity then the attack came."

The PM apprehended something unusual can happen as a vested quarter that doesn't like the country's independence and development, and betterment of the masses, is out to hatch conspiracy to topple the government.

"Sometimes I apprehend (of unusual attack like the Aug 15, 1975 attack) as we're approaching towards becoming a developed country. We have made the country a developing one from the least development state," she said.

The PM continued: "Various apprehensions are coming to the light and hatching conspiracy starts whenever the fate of the people of Bangladesh is going to change towards betterment."

She said the country earlier witnessed a massacre in 1975 when the country's economy turned around and started journey towards prosperity immediately after the Liberation War under the visionary leadership of Bangabandhu.

"It was a rare instance in the world history to transform a war-ravaged country into a country towards prosperity by making it a least developed country in only three and a half years. It had been possible for Bangabadhu's visionary leadership, " she said.

The PM said the Father of the Nation had given the call of second revolution by taking measures to decentralise power to the grassroots so that development could took place in every corner of the country.

Bangabandhu made all the mahkumas into districts so that development can take place in a balanced way and every person can enjoy its benefit, she added.

The PM also unveiled the cover of the memorial book on the works and life of Father of the Nation Bangabandhu Sheikh Mujibur Rahman titled “Bangabandhu’s Unnoyon Darshon (Development philosophy of Bangabandhu)”.