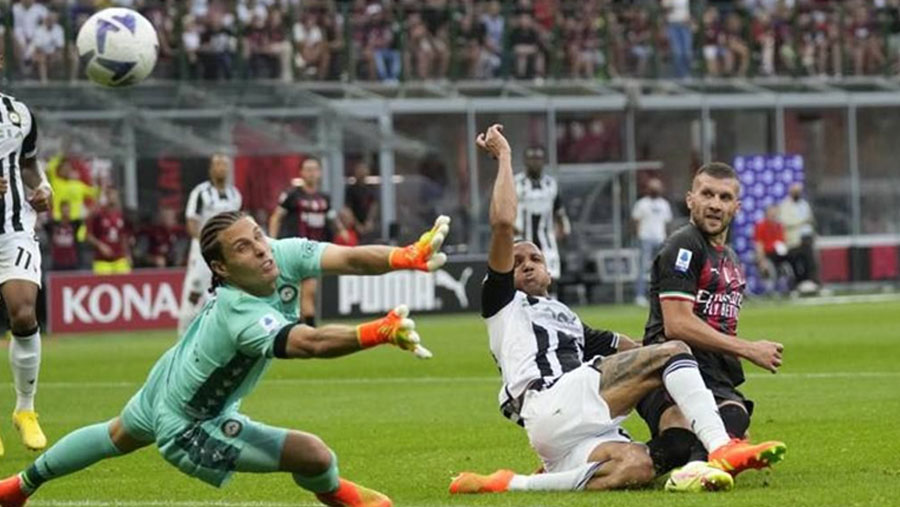 AC Milan got off to a winning start in their Serie A title defence with a hard-fought 4-2 win over Udinese on Saturday (Aug 13). Milan bounced back from going behind with less than two minutes on the clock to claim the three points thanks to two goals from Ante Rebic, a Theo Hernando penalty and a strike from Brahim Diaz.

Defending Serie A champions AC Milan got their new campaign off to a winning start with a 4-2 victory against Udinese.

In a thrilling first half, the San Siro was stunned when Rodrigo Becao headed the visitors in front from a corner. Milan then equalised through a Theo Hernandez penalty, before Ante Rebic put the hosts ahead from 12 yards out.

On the stroke of half-time, however, Udinese were back on level terms thanks to Adam Masina's strong header.

Within seconds of the restart, Milan were leading again when goalscorer Masina failed to deal with Hernandez's cross and inadvertently knocked it back into the six yard box to allow Brahim Diaz an easy tap in.

Rebic scored his second goal – and Milan's fourth of the night – from close range after good work from Diaz to take the ball off Roberto Pereyra near the touchline.

Former Liverpool striker Divock Origi, who joined Milan on a free transfer from the Premier League side this summer, was brought on by boss Stefano Pioli to make his league debut in the closing stages.

Atalanta won Saturday's other early match, 2-0 at Sampdoria through goals from Rafael Toloi and Ademola Lookman.