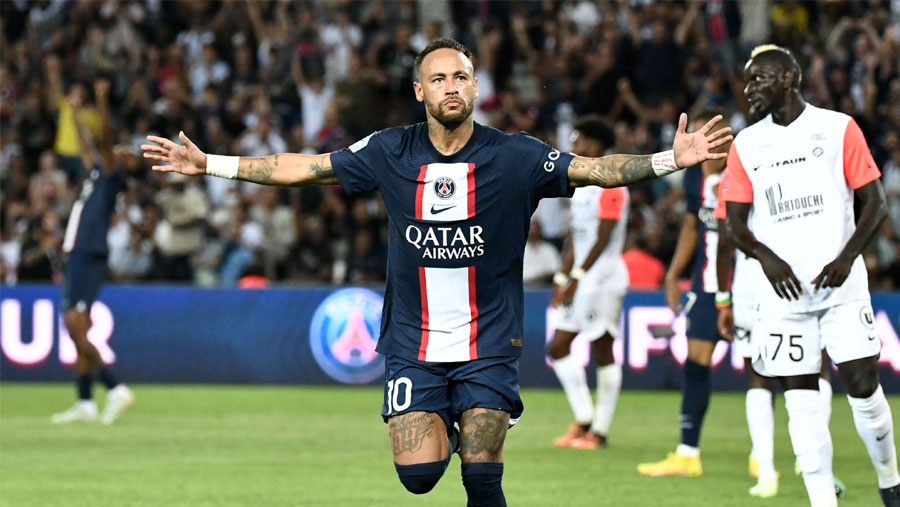 Neymar scored twice as Paris Saint-Germain made it consecutive wins to start the Ligue 1 season with an emphatic 5-2 victory over Montpellier at the Parc des Princes on Saturday (Aug 13). The champions started their title defence with a 5-0 win against Clermont last weekend in Christophe Galtier's first league game in charge, and they followed that up with a ninth success in their past 10 league games against Montpellier, despite a penalty miss from Kylian Mbappe midway through the first half.

Neymar scored twice as Paris Saint-Germain made it two Ligue 1 wins from two under new boss Christophe Galtier with a resounding defeat of Montpellier.

While Kylian Mbappe saw a first-half penalty saved, PSG went ahead through Falaye Sacko's own goal.

Neymar scored from the spot and headed his second to put the hosts three up.

Wahbi Khazri and Enzo Tchato were on target for Montpellier but Mbappe and Renato Sanches goals ensured another emphatic win for PSG.

In Galiter's first home game as boss, PSG dominated from the start, earning a 23rd-minute penalty after a Jordan Ferri handball.

While Mbappe was denied by Jonas Omlin, Sacko turned the ball into his own net before Neymar continued his fine form with a double either side of the break – having scored one and set up another three in last week's 5-0 win at Clermont.

Former Sunderland forward Khazri pulled one back for Montpellier but goals from Mbappe and Sanches – either side of what would have been a Neymar hat-trick goal being chalked off for offside – put PSG 5-1 clear before Tchato's superb consolation strike in added time.