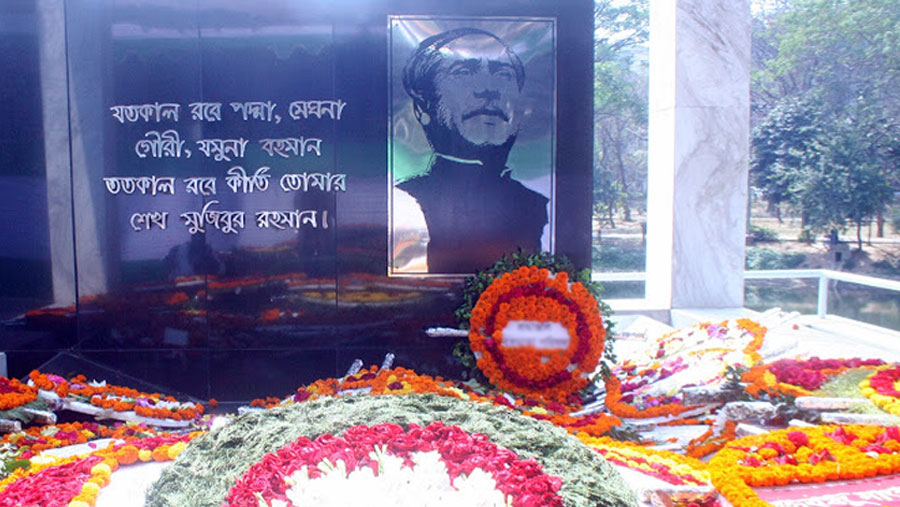 The nation is set to observe the National Mourning Day and 47th martyrdom anniversary of Father of the Nation Bangabandhu Sheikh Mujibur Rahman on Monday (Aug 15) with due respect and solemnity.

Bangabandhu and most of his family members were brutally killed by some disgruntled army men on the fateful night of Aug 15, 1975 and this carnage is touted as the ugliest chapter of the nation's history. Father of the Nation's two daughters Sheikh Hasina, now Prime Minister, and Sheikh Rehana escaped the planned assassination as they were staying abroad.

The government has drawn up elaborate programmes in observance of the day at national level. The national flag will be hoisted half-mast in all government, semi-government, autonomous institutions, educational institutions and private buildings including Bangladesh missions abroad, said a handout.

President Md. Abdul Hamid and Prime Minister Sheikh Hasina will pay homage to Bangabandhu, the architect of the independent Bangladesh, by placing wreaths at his portrait at 6.30 a.m. in front of Bangabandhu Memorial Museum at Dhanmondi Road No-32 in the capital. A guard of honor will be given by the armed forces and prayers will be offered there.

The PM will also place wreaths at the Banani Graveyard on the graves of the family members of Bangabandhu and other martyrs who were brutally killed on Aug 15, 1975. She will also offer Fateha and munajat seeking eternal peace of the departed souls of the martyrs.

Special supplement will be published in national dailies and periodicals highlighting the importance of the day.

The Department of Films and Publications (DFP) has published posters for distribution across the country. Posters in English have already been dispatched to Bangladesh diplomatic missions abroad.

The Department of Mass Communication will screen documentary films on the life and works of Bangabandhu across the country. The Press Information Department (PID) will organize a weeklong photo exhibition at the Bangladesh Secretariat. Regional Information Offices under PID will also arrange photo exhibitions at divisional level.

In line with the national programmes, discussion, Doa Mehfil and other programmes will also be held at the district and upazila levels. The government officials must join the events.

All city corporations, municipalities and union parishads of the country will arrange programmes to mark the day.

Bangladesh Awami League has also drawn up programmes to mark the martyrdom anniversary of Bangabandhu and the National Mourning Day. National and party flags will be kept at half mast and black flags will be hoisted atop all AL offices across the country including Bangabandhu Bhaban and central office during the sunrise.

Awami League leaders and workers will pay glowing tributes to Bangabandhu by placing wreaths at his portrait on the premises of Bangabandhu Memorial Museum at Dhanmondi road number 32 at 6 a.m.

Tributes will also be laid to other martyrs of Aug 15 by placing wreaths at their graves in Banani graveyard at 8 a.m. Special munajat, offering of Fateha, mazar ziarat and milad mahfil will also be held there.

A delegation of Awami League Central Working Committee, Gopalganj district and Tungipara upazila units of the party will pay homage to Bangabandhu by placing wreaths at his mausoleum at Tungipara in Gopalganj at 12 noon. Fateha offering, Milad and Doa Mehfil will be arranged there.

On Aug 16, a discussion will be arranged at Bangabandhu International Conference Centre (BICC) on the occasion of the National Mourning Day at 4.30 p.m. Awami League President and Prime Minister Sheikh Hasina will chair it.